Subscribe Us
HomeArticleWhy I will not celebrate Republic Day
Article 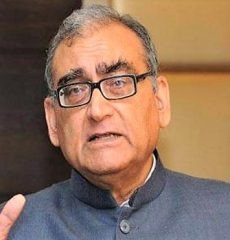 26th January celebrated all over India as Republic Day, the day on which in 1950 the Indian Constitution was promulgated and India declared a Republic.

However. I refuse to join this tomfoolery, and I have renamed it Cheer Haran (disrobing) Day. The truth is that the Constitution promulgated in 1950 has been flagrantly flouted and torn to shreds and has been rendered a scarecrow, hollow and empty, and now only acting as an instrument to deceive the people.

1. The Constitution guaranteed equality among the people vide Articles 14 to 18, which were proclaimed as fundamental rights. Also, Article 38(2) stated, “The state shall strive to minimize inequalities in income”. Article 39(c) stated that the state shall direct its policy to ensure that there is no concentration of wealth.

But what is the reality today? It is reported that 7 Indians own wealth equal to the wealth of the bottom 50% of the 135 crores ( 1350 million ) Indian people who are abysmally poor. Also, certain sections of our society, e.g. Muslims, Dalits, etc are not treated as equals and often oppressed.

So much for equality!

2. Article 21 of the Constitution ‘guaranteed’ life and liberty. But sedition and preventive detention laws make a mockery of it, as exemplified by the arrest, incarceration, and concocted and fabricated cases against those who criticize the government, like Dr. Kafeel Khan, Safoora Zardar, and many others. Fake ‘encounters’ by the police ( which are nothing but cold-blooded murders ) has been the order of the day in UP.

Article 19(1)(a) guaranteed freedom of speech, but even a satirical tweet can result in deprivation of liberty, as illustrated by the arrest and detention of the journalist Abhijit Iyer Mitra, while the Supreme Court, the much flaunted ‘custodian of the rights of the people’, rejected his bail plea with the flippant remark by the then Chief Justice of India Gogoi ( who was rewarded by the Government for his services to it by giving him a seat in the Indian Parliament after retirement ) ” You are safest in jail” ( see my article ‘ All the times the Supreme Court turned Nelson’s eye to injustice ‘ published in thewire.in).

Although in Romesh Thapar vs the State of Madras—a judgment given by the Supreme Court a few months after the promulgation of the Constitution in 1950—it was held that in a democracy people had the right to criticize the government, it is often dangerous to do so. In West Bengal, the Jadavpur University Professor Ambikesh Mahapatra was arrested for circulating cartoons of Chief Minister Mamata Banerjee, and a farmer, Silanath Choudhary, was arrested for telling Banerjee in a public rally that she had not kept her election promises.

In Tamil Nadu, the folk singer Kovan was arrested for singing a song criticizing the then chief minister Jayalalithaa for profiting from state-run liquor shops. In Maharashtra, the cartoonist Aseem Trivedi was arrested on sedition charges for making a cartoon depicting politicians as corrupt. In Gujarat, Dhavai Patel, the editor of the website ‘Face the Nation’ was arrested for publishing that the Chief Minister may be replaced for not handling the corona situation properly. In Manipur, the journalist Kishorechand Wangkhem was arrested and kept in jail for several months for criticizing Chief Minister Biren Singh. Many other such instances can be given of flagrant violation of Articles 19(1)(a) and 21 with impunity, while the judiciary, which was meant to uphold and protect these rights, turned a blind eye to it, like Bheeshma Pitamah before whom Draupadi was being stripped before the assembled Kauravas.

So much for freedom of speech!

4. Article 25 ‘guarantees’ freedom of religion. But that did not prevent the lynching of Muslims by cow vigilantes, prosecution and arrest of Muslims on false charges e.g. in the ‘riots’ in northeast Delhi, and beating them for not saying ‘ Jai Shri Ram ‘, vandalism against churches in Delhi or persecution of Christians in Odisha.

In the Ayodhya verdict, the Supreme Court, while accepting that the demolition of the Babri Masjid was illegal, yet handed over the site for building a Ram temple on it ( see my article ‘ The Ayodhya verdict is based on a strange feat of logic ‘ published in thewire.in ).

(e) to promote harmony and the spirit of common brotherhood amongst all the people of India transcending religious, linguistic, and regional or sectional diversities; to renounce practices derogatory to the dignity of women;

These provisions have become hollow and empty shells.

So much for our secularism!

5.  Article 39(f) directs the state to ensure that children develop in a healthy manner, and Article 47 directs it to raise the level of nutrition. And yet over 70 years after independence, 47 percent of Indian children are malnourished. We have the distinction of having over one-third of the world’s malnourished children (see data given by Global Hunger Index). In this respect, we are worse than sub-Saharan countries like Somalia.

6. Article 39A states that the state shall ensure that the legal system promotes justice. But with 33 million pending cases and cases often taking decades to decide, where is justice?

7. Article 41 states “The state shall make effective provision for securing the right to work and education, and public assistance in cases of unemployment, old age, and sickness.”

But our state is in the hands of our crooked netas who are only interested in power and pelf, and care two hoots for this provision (probably very few would even know of its existence).

Prime Minister Narendra Modi, in his 2014 election campaign, promised the creation of 2 crore jobs annually if BJP came to power. But it is estimated demonetization alone destroyed 2 crore jobs, and unemployment has mounted to record heights in India lately.

As for good education, it is available only to a few in India, and most schools are in abysmal condition.

For the rich and mighty, there are state-of-the-art hospitals, but for the masses, there is little.

Article 47 of the Constitution states :

” The State shall regard the raising of the level of nutrition and the standard of living of its people and the improvement of public health as among its primary duties “.

But every second child in India suffers from malnutrition ( as stated above ), many of them being thereby stunted, and  every second woman anaemic.

Article 43 states that the state shall endeavor to secure a living wage to workers, industrial or agricultural. But with the massive level of unemployment in India, and the contract system largely replacing security in employment, a worker dare not ask a wage higher than whatever pittance he gets, lest he lose his job. And as for agriculture, this provision is a cruel joke on the over 350,000 farmers who have committed suicide in India.

Article 48A directs the state to protect and improve the environment, but the air and water pollution levels in most Indian cities (even in the capital Delhi) have reached record heights, there is garbage and filth everywhere, and our rivers are badly polluted.

Article 51A(h) states that it is the duty of all citizens to promote the scientific temper. But we have a Prime Minister who said that the fact that Lord Ganesh had the head of an elephant shows that ancient Indians knew head transplant surgery and genetic engineering. We have a Governor ( of West Bengal ) who said that Arjun had arrows with nuclear power and ancient India had flying chariots. A few years back in the Indian Science Congress some ‘scientists’ claimed that the Kauravas were born by stem cell and test tube technology, and there were guided missiles, aircraft and airports in ancient India.

So what is there to celebrate about? Cheer haran has been done to our Constitution, and so let everyone enjoy, revel, and celebrate, but I refuse to join them in the charade today.Indicanews.com

The number of politicians with criminal cases has increased in...