Will get back illegally occupied territories from India, says Nepal PM 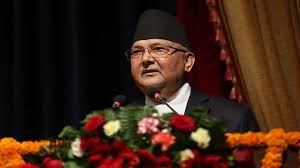 Kathmandu: Nepal prime minister KP Sharma Oli has asserted that he will take back the Kalapani, Limpiyadhura and Lipulekh territories from India.

Addressing a session of the Nepal National Assembly, PM Oli said, “Kalapani, Limpiyadhura and Lipulekh which are located east of the Mahakali River belong to Nepal as per the Sugauli Treaty. We will get them back through diplomatic talks with India.”

His remarks come mere days before the Nepalese foreign minister is set to visit India amid strained ties between the two neighbours.

“Our foreign minister will visit India on January 14 during which his discussion will be centred on the issue of the map that we have published with the inclusion of the three territories,” Oli told Nepalese legislators.

The Nepalese government kicked up a row last year with India after it showed Indian territories as part of Nepal in a new political map.

The release of the map led to strong protest from India with the Ministry of External Affairs condemning the “unilateral act”. India also cautioned Kathmandu that such “artificial enlargement” of territorial claims will not be acceptable to it.

The bilateral exchanges that had stalled due to the bitter boundary dispute were reset in the later part of 2020 with a series of high-level visits, as New Delhi emphasised that it sees itself as the Himalayan nation’s “foremost friend” and development partner.

Foreign Secretary Harsh Vardhan Shringla’s maiden visit to Nepal in November was largely aimed at resetting bilateral ties. Shringla met Prime Minister Oli and other top political brass and emphasised that India and Nepal are on the same page and share the same vision.

PM Oli had earlier claimed that efforts were being made to oust him after his government redrew the country’s political map by incorporating three strategically key Indian territories. India Today

‘We Are One’: Why Punjab’s landless Dalits are standing with...