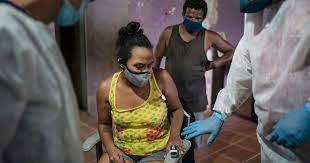 New Delhi: India reported 4,041 new Covid-19 infections on Friday — the highest single-day jump since March 11 — stoking fears of another wave building up in some parts of the densely-populated country that has eased almost all restrictions.

The South Asian nation has recorded 43.17 million Covid infections since the start of the pandemic and 524,651 fatalities, according to health ministry data, although the World Health Organization has said the death toll is significantly higher. The daily positivity rate, or the confirmed Covid cases as a percentage of overall tests, stands at 0.95% for the country while the weekly positivity rate has begun inching up, the data show.

The state of Maharashtra, which was also an early hotspot in previous virus waves in India, is again seeing a spike in Covid infections, with the positivity rate breaching 8% this week. Its capital, Mumbai, saw a 231% surge in hospitalizations in May compared with the preceding month. While hospital admissions in May were just 215, the trajectory has alarmed state authorities. India’s devastating delta-led wave last summer had pushed daily cases past 400,000, overwhelming hospitals and crematoriums.

Even as the world learns to live alongside Covid, its highly-transmissible variants such as omicron are still triggering new waves in places like China, New Zealand and Taiwan that had so far avoided the worst of the early pandemic. Chinese cities of Shanghai and Beijing continue to see cases despite hard containment measures while Hong Kong revived some of its toughest curbs as new variants flared up. –Bloomberg