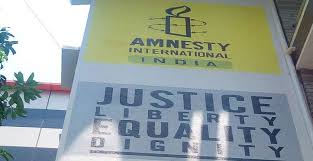 Mumbai: Amnesty International said it was halting its operations in India, firing its staff and pausing campaign and research work because of an “incessant witch-hunt of human rights organizations by the government of India over unfounded and motivated allegations.’’

The freezing of Amnesty International India bank accounts by the government, which the organization learned about brought all of Amnesty’s work to a halt, the human rights organization said on its website.

The organization said it faced constant harassment by government agencies, including the Enforcement Directorate, a specialized financial investigation agency which enforces laws about foreign exchange violations and money laundering.

Analysts say this is only the second time Amnesty has shut operations from any of its offices across 70 countries worldwide after closing its Russia office in 2016. An estimated 150 employees are likely to be affected.

Amnesty said it saw a link between the publication of recent reports and the government’s harassment. On August 28, 2020, it released a report on communal riots in Delhi that took place six months earlier when President Donald Trump was visiting New Delhi.

On August 5, 2020 it released an update on human rights in Jammu and Kashmir a year after the state was divested of its special status, split and both parts downgraded to union territory status from a fully fledged state. On April 13, 2020 it called on Uttar Pradesh state to stop intimidating journalists using repressive laws during the pandemic.

Amnesty alleges that two weeks after its testimony at the US Congressional hearing on human rights in South Asia with a focus on Jammu and Kashmir in October 2019, it was raided by the Central Bureau of Investigation over alleged violations of the Foreign Contribution Regulation Act, and was referred for a money-laundering investigation.

“The constant harassment by government agencies including the Enforcement Directorate is a result of our unequivocal calls for transparency in the government, more recently for accountability of the Delhi police and the government of India regarding the grave human rights violations in Delhi riots and Jammu and Kashmir.”

Amnesty said it complied with all local and international tax laws.

In early 2019, the Income Tax Department investigated 30 of its small but regular donors. It found no irregularities but Amnesty said its fundraising campaigns were affected. On October 25, 2018, Amnesty alleges it faced an Enforcement Directorate raid for 10 hours behind closed doors.

There was no immediate response from the government.

Amnesty’s plans to halt operations could affect India’s reputation as a liberal democracy that respected human rights, some observers said.

“India’s stature as a liberal democracy with free institutions, including media and civil society organizations, accounted for much of its soft power in the world,’’ Sashi Tharoor, a member of parliament and a former junior foreign minister with the Congress-led government posted on Twitter.

“Actions like these both undermine our reputation as a democracy and vitiate our soft power.’’

Tharoor worked at the United Nations from 1978 until 2007 in various capacities, last as under- secretary general. He contested for the post of secretary-general in 2006 but lost to Ban-Ki-moon.

Started by British lawyer Peter Benenson in 1961, Amnesty first opened an office in India in the state of Bihar in 1966. Asiatimes.com

Officials say peace accord between Sudan & Israel is already...