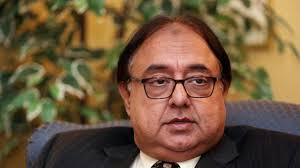 Canada: Pakistan’s High Commissioner to Canada Raza Bashir Tarar has said that India’s revocation of the status of Indian Illegally Occupied Jammu and Kashmir (IIOJK) and a consistent denial of Kashmiris’ Right to self-determination are manifestation of an Indian game-plan that dovetails into a larger Hindu supremacist ideology.

According to the details, the high commissioner said this in an interview with a Canadian Television.

Raza Bashir Tarar said that any conflagration in the Kashmir region disturb the global peace. He said the changing the special status of IIOJ&K had made it clear that India did not care about anyone even the UN resolutions.

Complete shutdown in Sopore in memory of massacre victims