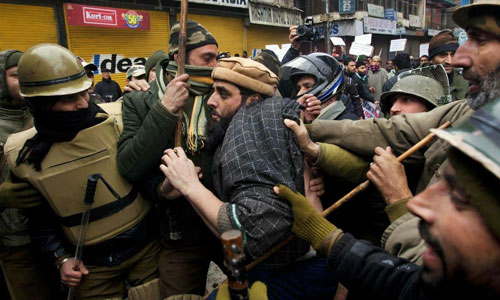 Islamabad: The Jammu and Kashmir Democratic Freedom Party (DFP) has strongly condemned the recent crackdown by Indian forces on Hurriyat leaders and political activists in Indian illegally occupied Jammu and Kashmir (IIOJK) saying that it was a clear violation of basic human rights.

The DFP Acting Chairman, Mehmood Ahmed Saghar, in a statement condemned the illegal arrest of Hurriyat leaders, Ghulam Ahmed Gulzar, Molvi Bashir Ahmed and Mushtaq-ul-Islam and termed it an attempt by the Indian authorities to suppress the voices of people struggling against the continued Indian occupation.

Mehmood Ahmad Saghar said that this crackdown is an atrocious assault on the fundamental freedom rights. He said these arrests won’t deter the Kashmiris from pursuing their noble cause for which they have rendered matchless sacrifices.

He appealed to the world community particularly the UN to take cognizance of the situation in IIOJK and force the Indian government to stop human rights violations in the territory.

Expressing his grave concern over the miserable plight and continued illegal detention of party Chairman, Shabbir Ahmed Shah, and other Hurriyat leaders, he urged the human rights organizations to play their role in early release of the Kashmiri political prisoners.

Veterans of Iraq, Afghanistan and Libya tossing their medals in...