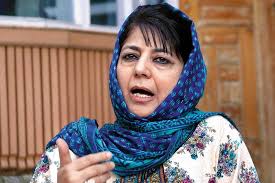 Srinagar: People’s Democratic Party (PDP) President Mehbooba Mufti has said that the purpose of grand alliance, People’s Alliance for Gupkar Declaration (PAGD), is not for petty electoral gains, but it exists for cause and purpose to restore IIOJK’s special status.

Mehbooba Mufti wrote on her twitter handle: “Amidst all the unnecessary speculations about PAGD, I’d like to make a few things absolutely clear. The purpose of this grand alliance is not for petty electoral gains. It exists for a much larger cause & purpose i.e. to restore J&Ks special status”.

She further wrote that a lot of baseless theories are being deliberately floated to discredit PAGD amongst the masses since they overwhelmingly voted for us in the DDC elections. “Regardless of who fought how many seats, our purpose to deny BJP & its proxies democratic space has been achieved,” the PDP chief’s tweet read.

In yet another tweet, she said: “Delhi is deeply rattled by PAGD so I expect this false campaign to intensify in the coming days.”

“Many PDP leaders are already arrested & I expect the situation to worsen. But this will not break our resolve to stand united & fight for what’s rightfully ours,” she concluded.

Meanwhile, PDP youth wing president Waheed Para, who was granted bail by an NIA court Saturday, was arrested again by the police. Mehbooba Mufti termed the arrest of her party colleague Waheed Para an act of political vendetta against her party for raising voice against Delhi’s onslaught.

Russian forces deploy near highway used by Washington East of...