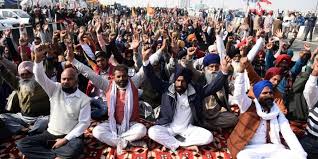 New Delhi: Hundreds of thousands of farmers have been camped on the outskirts of Delhi, India’s capital and largest urban agglomeration, for more than a month as part of a protest against the far-right Bharatiya Janata Party (BJP) government’s pro-agribusiness “reform” laws.

The farmers launched their Delhi Chalo (Let’s go to Delhi) agitation on November 26. It was timed to coincide with a one-day general strike, joined by tens of millions of workers, to protest the Narendra Modi-led BJP government’s “pro-investor” policies, and demand aid for the hundreds of millions of impoverished workers and toilers whose incomes have been slashed amid the COVID-19 pandemic.

Modi and the BJP-led state governments of Haryana and Uttar Pradesh, which surround the National Capital Territory, deployed thousands of police and paramilitary forces, water cannon and tear gas to prevent the Delhi Chalo protesters from reaching the national capital as planned on Nov. 27. But to the government’s dismay, the farmers responded by setting up camp along half-a-dozen major highways at Delhi’s border.

In September, the Modi government rammed three farm “reform” laws through the national parliament. Long demanded by big business, these laws will boost domestic and international agribusiness at the expense of India’s farmers, the vast majority of whom have only small land holdings of two hectares (5 acres) or less.

The BJP’s agrarian reform is part of a much wider assault on India’s workers and toilers. The same Monsoon session of parliament that passed the three farm laws, amended the labour code to promote contract labour, outlaw virtually all strikes, and empower large employers to lay off workers at will.

The Modi government has sought to quell the farmers’ agitation, with threats of further repression and offers of small, largely cosmetic changes to the farm bills. Buoyed by widespread popular support, the farmers have braved winter weather, the threat of COVID-19 and numerous health and other challenges to press their demand for the repeal of all three laws.

The government has smeared the protesting farmers, in an attempt to undermine their public support and with a view to laying the political groundwork for mobilizing state security forces to violently evict them. BJP ministers and spokespersons have claimed the farmers’ agitation is backed by China and Pakistan, and that it has been infiltrated by Naxalites (Maoist insurgents) and Khalistanis, (supporters of a separate Sikh state).

After the government failed to persuade the farmers to withdraw, it ordered water supplies cut to the protest sites, creating a sanitary disaster. At least 30 farmers have died during the month-long agitation, as a result of the trying physical conditions and traffic accidents.

The farmers’ agitation has thrown the Modi government and the entire Indian ruling elite into crisis. Their greatest fear is that the farmers’ struggle could become the catalyst for a broader working-class-led movement—a movement that would challenge not just Modi and his Hindu supremacist BJP, but the right-wing, pro-investor agenda that every Indian government has pursued for the past three decades.

The corporate media has strongly backed Modi’s repeated vows that his government will not repeal the farm laws. Big business fears that if the government is seen to retreat before the farmers’ agitation it will galvanize mass opposition among working people, and jeopardize their plans to establish India as an alternate cheap-labour production-chain hub to China.

At present, the corporate elite favours the government seeking to wear down the protesters through dragged out talks and by undercutting their support with smears and other subterfuges, rather than risking a violent confrontation that could ignite protests across India.

This is the significance of the ruling India’s Supreme Court issued on the farmers’ protest on December18. Multiple petitions had been brought before the court requesting it declare the farmers’ agitation illegal, on the grounds that the protest has impeded, and much of the time blocked, traffic on the major highways in and out of Delhi.

India’s highest court has repeatedly provided a legal imprimatur for some of the Modi government’s most aggressive and anti-democratic measures, from the last year’s constitutional coup against Kashmir to the building of a Hindu temple dedicated to Lord Ram on the site of the razed Babri Masjid.

Yet in its December 18 ruling, the Court asserted that the farmers have “a fundamental right to protest against” the agrarian reform laws. “There is no question,” declared Chief Justice S.A. Bobde, “of balancing or curtailing” that right.

The court urged the government and farmers’ organizations to find a negotiated solution, and even offered to help mediate the dispute. But it also left the door wide open to declaring the farmer protest illegal in the future, and green-lighting its state suppression. “We are of the view at this stage,” said the Supreme Court, “that the farmers’ protest should be allowed to continue without impediment and without any breach of peace either by the protesters or the police.”

The Modi government is continuing to press the farmers’ organizations to call off their protest. Yesterday, at the conclusion of a sixth round of talks between government representatives and 41 farmer organisations, the government claimed agreement had been reached on two issues: the farmers’ complaints about proposed electricity price hikes and recently enacted penalties for the burning of stubble. However, there was no movement on the farmers’ key demands, which are the repeal of the three farm laws and a legal guarantee that the Minimum Support Price (MSP) system will be maintained. The two sides agreed that they will meet again on January 4.

In recent weeks, Modi has been trying to promote himself as a “pro-farmer” leader. At a December 25 event, Modi released the next installment of the government’s Pradhan Mantri Kisan Samman Nidhi scheme, under which all farmers are entitled to 6,000 rupees (about US $82) a year in minimum income support. Such posturing has gone alongside incessant attacks on the opposition parties, whom Modi accuses of inciting and “misleading” the farmers.

The claims of the Congress Party and the other regional and caste-ist opposition parties to “oppose” the BJP’s farm laws and “support” the farmers’ agitation are utterly cynical and hypocritical. These parties are no less committed to enforcing pro-investor reforms than Modi and his BJP. Congress, till recently the Indian bourgeoisie’s preferred party of government, initiated in 1991 and for much of the next quarter-century spearheaded the process of transforming India into a cheap labour platform for global capital, and a close ally of Washington.

When Modi claims that Congress-led governments tried to impose similar pro-agribusiness reforms but retreated due to fears of popular opposition, the BJP leader is for once telling the truth.

That the objective conditions exist for such a movement has been shown by the mass participation in the November 26 and January 8 general strikes and a mounting wave of strikes and worker protests against job cuts, poverty wages, speed-up and, among health care workers, the lack of personal protective equipment (PPE). In the state of Karnataka, for example, over 3,000 Toyota Kirloskar Motors (TKM) workers have been defying a government back-to-work order for more than a month, after striking in opposition to management’s demand they boost production by 25 percent.

Rather than fighting for the working class to intervene as an independent political force, the Stalinists’ main goal is to boost the political authority of the Congress Party and the other right-wing opposition parties. Throughout the farmers’ agitation, the CPM and CPI have been working in tandem with the Congress, issuing joint statements of “support” and even organizing a joint delegation of opposition leaders to visit Indian President Ram Nath Kovind, a notorious BJP hack, to urge him to press Modi to address the farmers’ grievances.

Last week, the Congress Party high command officially announced that it will contest the coming state elections in West Bengal, India’s fourth most populous state, in an alliance with the CPM, CPI and their Left Front.

While keeping the working class on the sidelines, the Stalinists are also doing nothing to broaden the movement among the rural toilers, by advancing demands to meet the needs of the agricultural workers and landless who make up the majority of rural households.

The Stalinists are using what influence they have among farmers and the rural poor through the CPM-led All India Kisan Sabha (AIKS) and other farmer organizations to push for the farmers to reach a compromise with the Modi government. Earlier this week, CPM Politburo member and AIKS General Secretary Hannan Mollah insisted, “that there cannot be a resolution without a dialogue with the government.”

He then proceeded to dismiss Modi’s claim that the Stalinists are playing a leading role in the farmer’s agitation with the aim of destabilizing BJP government. In the process, Mollah made clear that the CPM is determined to keep the farmers’ agitation apart from the growing groundswell of opposition to the government and its pro-investor policies, and within the strict confines of establishment politics. The BJP, said Mollah, “are busy pushing an agenda on the movement that was never ours to start with. Out of the 500 organizations which are part of the farmer struggle, around 10-11 would be left-leaning.” World Socialist Website