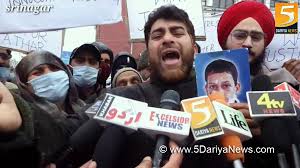 Jammu: The Jammu and Kashmir Peoples Movement (JKPM) has demanded of the authorities to hand over the bodies of three youth killed by Indian troops in a fake encounter in Srinagar recently.

The JKPM Chairman, Mir Shahid Saleem while talking with media demanded a thorough probe into the staged-encounter. He said as per the locals and the police there was no evidence of involvement of the youth in any subversive activity. He deplored that the killing of innocent people in fake encounters by the troops has become a norm in the occupied territory.

The JKPM leader called upon the international community to take cognizance of human rights violations being perpetrated by Indian troops in IIOJK and exert pressure on India to respect human rights and civil liberties in the territory.

Speakers demand UN to implement its resolutions on Kashmir