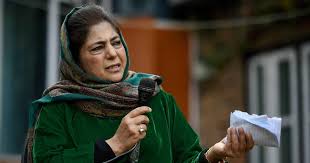 Srinagar: President of Peoples Democratic Party (PDP), Mehbooba Mufti has said that the Modi-led BJP government is persecuting Kashmiri politicians for not toeing its line.

Mehbooba Mufti, in a series of tweets, said that the party’s detained youth leader Waheed Para’s persecution by the Indian govt is emblematic of the situation that Kashmiri politicians find themselves in today.

She said that on one hand they are being disliked and mistrusted by people in Jammu and Kashmir while on the other New Delhi is punishing them for not toeing its line.

Waheed-ur-Rehman Para, who had filed his nomination papers before his arrest on 25 November 2020, was elected to the District Development Council from Pulwama while in custody. He was granted bail by a court of National Investigation Agency (NIA) earlier this month, but later was taken into custody by the Counter Insurgency Kashmir (CIK) wing of the Indian police.

Time for world to see India as state-sponsor of terrorism:...