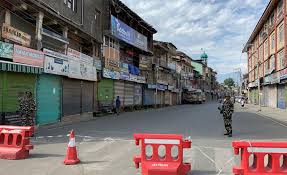 Srinagar: A complete shutdown is being observed, today, to condemn the killing of innocent youth in fake encounters by Indian troops in Indian Illegally Occupied Jammu and Kashmir (IIOJK).

The shutdown is being observed in Srinagar, Islamabad, Shopian, Pulwama and other areas against the innocent killings.

Anti-India and pro-freedom protest demonstrations will be held after Friday prayers.