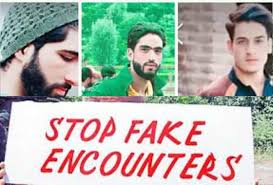 Srinagar: The three youth, who were martyred by Indian troops in a fake encounter in Lawaypora area on Wednesday, had neither any case or FIR against them in their respective police stations nor was any missing report filed about them in South Kashmir’s Pulwama or Shopian districts.

Police sources said that there was no complaint against Zubair with them. “He was never booked for any adverse thing including creating law and order or taking part in stone pelting. There is no militancy record with us about Zubair and there was any missing complaint lodged by his family,” the police said.

Meanwhile, family members of the martyred youth demanded international probe into the killing.