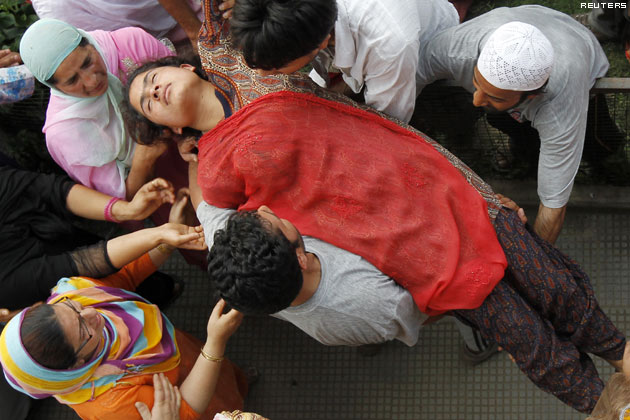 Islamabad: The miseries and victimization of the Kashmiri women at the hands of Indian troops, police and agencies continue unabated in Indian illegally occupied Jammu and Kashmir as world is celebrating International Women Day.

According to a report, released on the occasion of the global women day, today, thousands of women are among 95,747 Kashmiris, martyred by Indian military, paramilitary and police personnel since January 1989 till date. At least 675 women have been martyred by the troops since January 2001 till date.

The report pointed out that the unabated Indian state terrorism rendered 22,924 women widowed. The Indian forces’ personnel molested 11,236 women including the victims of Kununposhpora mass rape and Shopian double-rape-and murder of 17-year-old Aasiya Jan and her sister-in-law Neelofar Jan. An eight-year-old girl, Aasifa Bano, of Kathua, was abducted, gang-raped and subsequently murdered by Indian police personnel, in January 2018 while several including Nusrat Jabeen, Haleema Begum, Fatima Begum, Nighat Bashir and Khairul Nisa were molested by the troops in 2020 as glimpses of some heinous crimes against women in Kashmir.

Indian troops on February 10, 2021 abused a minor girl and dragged her into their vehicle when she along with her sister was working in her garden at Chewa-Ajas in Bandipore district. On raising hue and cry by her sister, the locals rushed to the spot to rescue the minor victim. The victim family lodged an FIR in Ajas Police station and the troops harassed and pressurized the family to withdraw the case.

The report said that thousands of women lost their sons, husbands, fathers and brothers in the occupied territory who were subjected to custodial disappearance by India troops. As per the Association of Parents of Disappeared Persons, more than 8,000 Kashmiris went missing in custody during the past 33 years, the report added.

Four-year-old Zuhra Majeed was hit by pellets in her legs and abdomen after her family was targeted by Indian police outside their home in Qamarwari in Srinagar on July 10,2016.

A 17-year-old Ulfat Hameed, a Class 10 student from Baramulla said “I used to teach sewing and tailoring to girls in my village, but not anymore. Because of the injuries, I could not write my class 10 board exam”.

In 2020 saw surge in harassment of Kashmir journalists. A 26-year-old Kashmiri photojournalist Masrat Zahra was threatened and summoned by Indian police and was charged under black law Unlawful Activities (Prevention) Act (UAPA), in April 2020 for posting a news on social media. She was punished for speaking truth on Kashmir.

The report further pointed out that womenfolk are among majority of the Kashmiris suffering from multiple psychic problems.

The women who lost men in the form of enforced disappearance are referred to as “half-widows,” because of their uncertain status between wifehood and widowhood.

Many mothers are waiting for their disappeared sons while widows and half-widows are in pain since decades in occupied territory.

From AJK, around 400 women who married Kashmiri youth are facing injustice as Indian government is neither giving them citizenship rights, nor travel documents to get back AJK. Their children are not getting admissions in government schools. “I came here in 2012. My mother died recently but I could not go to see her one last time. We can’t meet our relatives and family members. Parents of many women died during these years but they could not attend the funeral,” said Saba Fayaz who belongs to AJK and married a local Kashmiri youth.

Hurriyat leaders and organizations have said that the women across the world are observing International Women Day but the oppressed women of Kashmir have nothing to commemorate.

International Forum For Justice Human Rights JK Chairman Ahsan Untoo in a statement issued in Srinagar said the Kashmiri women are carrying the heaviest burden in this conflict as they face Indian barbarity and carry the cost of the military occupation.

Women in Kashmir don’t enjoy the basic rights which are given under the Universal Declaration of Human Rights (UDHR) and even promised under CEDAW (The Convention on the Elimination of All Forms of Discrimination Against Women) adopted in 1979 by the United Nations General Assembly described as an international bill of rights for women.

He urged instruments of international justice, watchdogs like UN and international community to intervene and monitor the sufferings o Kashmiri Women.

He said Kashmiri women stand like a rock today facing the worst sort of political and social pressures like Rafiqa Begum, the wife of illegally detained Hurriyet leader Aiyaz Akbar. She is a metastatic cancer patient and lying on the bed at her home in Maloora, Shalteing in Srinagar. Her husband Ayaz Akbar is facing illegal detention in Indian’s Tihar jail since July 2017. Rafiqa Begum is suffering from the disease soon after her husband was arrested on fake charges by the NIA. “My sons are unemployed and they have to struggle to meet their ends. Our life is ruined after my husband was arrested for no reason and lodged in Tihar jail for just having a political ideology”.

Din Kalwal having four daughters said she is suffering from depression so are my daughters who have not seen their father since long.

“Our life has turned into hell. We have to make our ends meet. In his absence, things have become too difficult. Our relatives do help us. But it can’t go long way. We have no one to look after us”. She said that her husband has been kept in jail for just his political views.

Another victim woman Rafia Begum whose son Athar Mushtaq Wani was killed by Indian troops in a fake encounter in Srinagar in December 2020.The mother lost everything and often breaks into tears demanding justice and return of the body of his son who was buried along with two more youth by Indian troops in an unknown graveyard in Ganderbal.

APHC leader Yasmeen Raja in a statement in Srinagar said that the United Nations claimed that it protects women around the world and major countries of the world promise to provide justice to women, but they did nothing for the protection, security and dignity of oppressed women in occupied Kashmir.

APHC leader and Democratic Political Movement Chairman Khawaja Firdous in a statement issued in Srinagar said that India is using molestation of women as a weapon in the occupied territory. He said that women are taking a leading role in the ongoing freedom struggle and called upon the international community to impress upon India to protect women rights in the territory.

Jammu and Kashmir Muslim Conference Chairman Shabbir Ahmed Dar in a statement while paying respects to all women of the world particularly the Kashmir said that “Women in leadership: Achieving an equal future in a COVID-19 world”, which is the theme for 8th March 2021 lays a lot of emphasis on Kashmiri women as our women leaders are caged for last four years in India’s Tihar jail for leading from the front to demand right of self-determination for their people.

The Jammu and Kashmir People’s Movement (JKPM) Chairman,  Mir Shahid Saleem while addressing a meeting of the party workers and office bearers in Jammu said that women in Jammu and Kashmir have always been at the forefront to bear the brunt of conflict. He urged the world community to play its role in mitigating the pain and sufferings of the Kashmiri women.

Jammu and Kashmir Political Party  Chairman  Mohammad Yousuf Naqash  in a statement said that India uses crimes against women as a policy use to suppress and silence the  people’s struggle for inalienable right to self determination  recognized by world.

Jammu and Kashmir People’s Association (JKPA) Chairman Aquib Wani sought attention of world bodies including United Nations to hold India accountable for the crimes against women committed by its troops in the disputed territory. He said, “The world must speak for the human rights of victims of Kanun-Poshpora, Asia-Nilofer, Mobena Ganaie, women in custody, half widows, mothers of martyred youth, women who were blinded by pellets, daughters whose fathers are in Indian jails, wives of detained resistance leaders and so on who are going through worse phase of mental trauma under subjugation.”

Jammu and Kashmir Mass Movement Secretary Information Shabbir Ahmad in a statement said that sons, husbands and fathers of Kashmiri women are killed by Indian troops right in front of them in the occupied territory.

Tehreek-e-Wahdat-e-Islami spokesman in a statement issued in Srinagar said that womenfolk are also a large-scale victim of Indian state terrorism. He said that India is using rape as a weapon tool to weaken Kashmiris’ spirit for freedom. TWI said that the plight of Kashmiri women warrants immediate attention by the international community.

Jammu and Kashmir Employees Movement General Secretary Junaid-ul-Islam in a statement saluted the courage of the Kashmiri women against all Indian brutal tactics. He said that Kashmiri women offered their sons for the freedom movement without caring for the consequences.

Jammu and Kashmir Youth Social Forum leader Tauseef Ahmad said that harassment and other forms of oppression against women continue in IIOJK.

The Kashmir Tehreek-e- Khawateen General Secretary Shameem Shawl in a statement said, the world is talking about the empowerment of women and the women in IIOJK are facing the humiliation every day. Women and young boys are lodged in different jails without committing any serious crime and their mothers are waiting for their early release, she added. She said, the women of Kigerpora, Kunan-Poshpora, Chanpora and dozens of other places are on record denied their justice till date and the men in uniform are still roaming free and even judiciary failed to nab culprits because men at the helm of affairs provided them shelter under draconian laws like Armed Forces Special Powers Act (AFSPA).

Hurriyat AJK leader Abdul Hameed Lone in his statement draw the attention of the world community towards the statements of BJP leaders against Kashmiri women particularly after August 5, 2019.

The Jammu and Kashmir Salvation Movement (JKSM) Chairman, Altaf Ahmad Butt addressing a party meeting in Islamabad said that women in Indian illegally occupied Jammu and Kashmir are living in unprecedented circumstances and are facing an extremely grim situation. No part on earth faces such apathy as women in IIOJK are facing. They are being caged, killed, maimed, targeted with lethal weapons and sexually molested, he added.