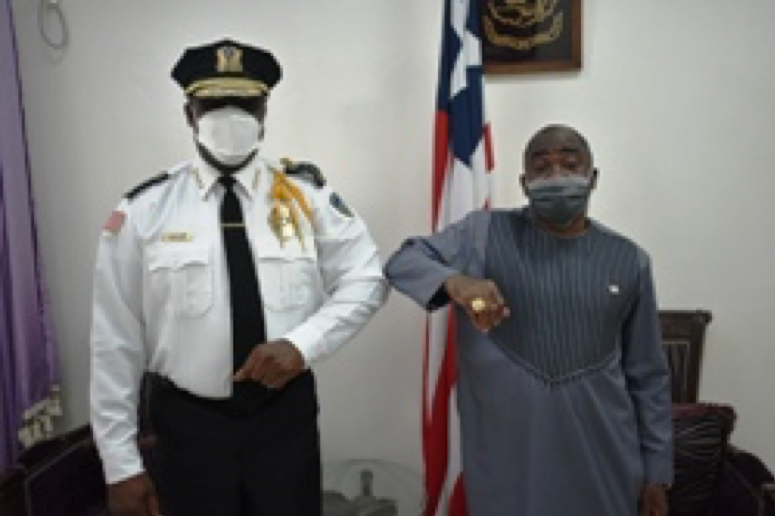 Monrovia: The Inspector General of the Liberia National Police (LNP), Col. Patrick Sudue has disclosed that after sending four LNP officers to South Sudan on United Nations peacekeeping mission, about thirty Liberian police officers are on the standby for future deployment on UN peacekeeping missions around the world.

Making the disclosure on February 1, 2021 during a courtesy visit to the Minister of Foreign Affairs, H.E. Ambassador Dee-Maxwell Saah Kemayah, Sr.,Col. Sudue praised the Liberia’s foreign minister for the pivotal role he played in New York during his service as Liberia’s Permanent Representative to the United Nations.

Col. Sudue noted that Ambassador Kemayah was very instrumental in making sure that officers of LNP are deployed on UN peacekeeping operation.

“The UN certified 34 LNP officers and 4 officers were selected to be deployed in South Sudan and 30 officers on the standby for future peacekeeping missions, anytime they can be called upon;  this is why we taught it wise to gown him because he was the one who made sure we met the UN deputy for peacekeeping head, and we had a fruitful discussion…this is the first of its kind in the history of Liberia for our police to be deployed on UN peacekeeping mission…if LNP is to get on the global map, it has to be done through the Ministry of Foreign Affairs”, Col. Sudue intoned.

Col. Sudue further disclosed that the UN peacekeeping office had requested the LNP to send in a Liaison Officer, who will serve between the UN and LNP, and is to be based in New York.

It can be recalled on Wednesday, January 13, 2021 the Liberia National Police conferred its highest honor on Ambassador as Honorary Chief of Police and gowned him in recognition of his immense contributions to the police force when he served as Ambassador at Liberia’s Permanent Mission at the UN in New York.Frontpageafricaonline.com

Hopes dim that intra-Afghan talks will be successful