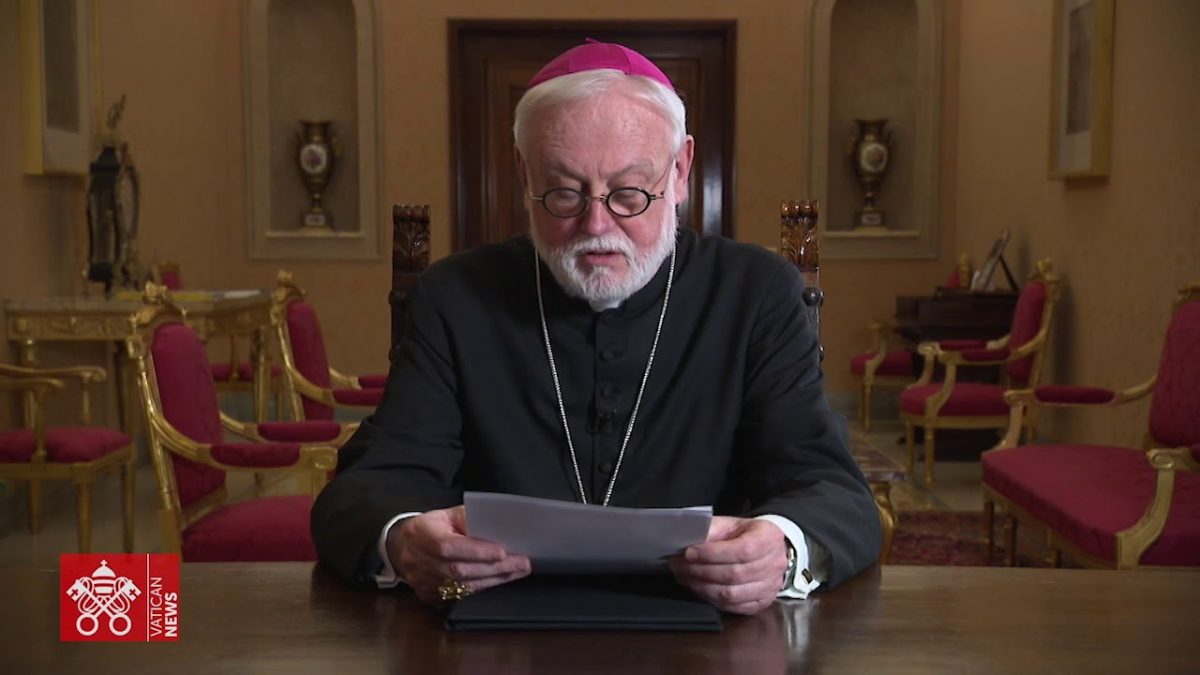 Vatican City: The Vatican’s Secretary for Relations with States, Archbishop Paul Richard Gallagher, has called on the United Nations to “rediscover the foundation of human rights, in order to implement them in an authentic fashion”, as the world continues to take measures to combat the Covid-19 pandemic.

Archbishop Gallagher made this appeal in a message during the 46th session of the United Nations Human Rights Council (UNHRC), which commenced in Geneva, Switzerland. The four-week-long session, held virtually due to the ongoing health emergency, kicks off with a 3-day high-level segment when heads of states and dignitaries representing various countries and regions will address the council by video.

For over a year now, Archbishop Gallagher noted, “the Covid-19 pandemic has been impacting every aspect of life, causing the loss of many and casting doubt on our economic, social, and health systems.” At the same time, “it has also challenged our commitment to the protection and promotion of universal human rights, while at the same time asserting their relevance.”

Recalling Pope Francis’s words in his latest Encyclical Fratelli tutti, Archbishop Gallagher underscored its relevance to our time, noting that “by acknowledging the dignity of each human person, we can contribute to the rebirth of a universal aspiration to fraternity.”

The Archbishop highlighted that the Preamble of the Universal Declaration of Human Rights declares that “the recognition of the inherent dignity of all members of the human family and of the equal and inalienable rights constitutes the foundation of freedom, justice and peace.” Likewise, the UN Charter asserts its “faith in fundamental of human rights, in the dignity and worth of the human person, in the equal rights of men and women, and of nations large and small.”

He pointed out that these two documents recognize an objective truth – that every human person is innately and universally endowed by human dignity. This truth, he further stressed, “is not conditioned by time, place, culture or context.”

Acknowledging that this solemn commitment “is easier to pronounce than to achieve and practice,” he lamented that these objectives are “still far from being recognized, respected, protected and promoted in every situation.”

Rights are not separated from universal values

Archbishop Gallagher went on to affirm that the true promotion of fundamental human rights depends on the underlying foundation from which they derive.

He, therefore, warned that any practice or system that would treat rights in an abstract fashion – separated from pre-existing and universal values – risks undermining their raison d’être, and in such a context, “human rights institutions become susceptible to prevailing fashions, prevailing visions or ideologies”.

The Archbishop further cautioned that “in such a context of rights devoid of values, systems may impose obligations or penalties that were never envisioned by state parties, which may contradict the values they were supposed to promote.” He added that they may even “presume to create so-called ‘new’ rights that lack an objective foundation, thus drifting away from their purpose of serving human dignity.”

The right to life

Illustrating the inseparability of rights from values with the example of the right to life, Archbishop Gallagher applauded that its content has been “progressively extended by countering acts of torture, enforced disappearances and the death penalty; and by protecting the elderly, the migrant, children and motherhood.” He said these developments are reasonable extensions to the right of life as they maintain their fundamental basis in the inherent good of life, and also because “life, before being a right, is first and foremost a good to be cherished and protected.”

Archbishop Gallagher stressed, however, that there is a risk “of undermining the value a right is intended to uphold when it is divorced from its fundamental basis.” He noted, for example, an unfortunate precedent in the Human Rights Committee’s general comments 36 on the right to life, which “far from protecting human life and dignity, twists its meaning to imply the right to assisted suicide and to end the lives of unborn children.”

In the face of the current Covid-19 pandemic, the Archbishop highlighted that some measures implemented by public authorities to ensure public health impinged on the free exercise of human rights.

In this regard, he proposed that “any limitations on the exercise of human rights for the protection of public health must stem from a situation of strict necessity,” because “a number of persons, finding themselves in situations of vulnerability – such as the elderly, migrants, refugees, indigenous people, internally displaced persons, and children – have been disproportionately affected by the current crisis.”

Any limitations imposed in an emergency situation, he insisted, “must be proportional to the situation, applied in a non-discriminatory fashion, and used only when no other means are available.”

Archbishop Gallagher also reiterated the urgency of protecting the right to freedom of thought, conscience and religion, noting in particular that “religious belief, and the expression thereof, lies at the core of the dignity of the human person in his or her conscience.”

Highlighting that the global response to the Covid-19 pandemic reveals that “this robust understanding of religious freedom is being eroded,” the Archbishop re-echoed the Holy See’s insistance that, “freedom of religion also protects its public witness and expression, both individually and collectively, publicly and privately, in forms of worship, observance and teaching,” as numerous human rights instruments recognize.

To respect the inherent value of this right, therefore, the Archbishop recommends that political authorities should engage with religious leaders, as well as leaders of faith-based organizations and civil society committed to promoting freedom of religion and conscience.

Archbishop Gallagher noted that the current crisis presents us with a unique opportunity to approach multilateralism “as the expression of a renewed sense of global responsibility, of solidarity grounded in justice and the attainment of peace and unity within the human family, which is God’s plan for the world.”

Recalling Pope Francis’ invitation in the Fratelli tutti encouraging everyone to acknowledge the dignity of each human person in order to promote universal fraternity, he encouraged all to be willing to move beyond that which divides us in order to effectively combat the consequences of the various crises.

Concluding his message, the Archbishop reaffirmed the Holy See’s commitment to engage collaboratively to this end. Vaticannews.VA