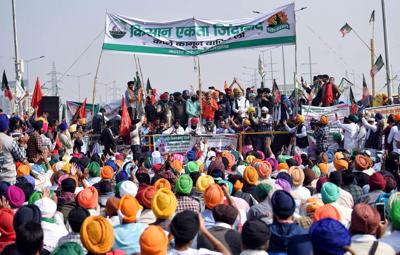 New Delhi: Four more farmers died over the past 24 hours in , raising the toll to sixty during the farmers’ protest against anti-farmer’s laws passed by fascist Modi government.

According to the details, these four Indian formers died at Tikri and Singhu near Delhi border. The toll of farmers from Punjab and Haryana alone crossed 50, union leaders condemned the ruling Haryana BJP-JJP alliance leadership for their silence on the loss of precious lives. No condolences have come from the ruling alliance leaders, said BKU leader Gurnam Singh Charuni.

BKU leader Rak“Sixty farmers have been martyred and there can be no going back on the demands now,” said BKU leader Rakesh Tikait.

“The agenda will be the Swaminathan Commitee report, the repeal of the three farm laws and a law for MSP. We will not go back. Till date 60 farmers have been martyred. The government will have to reply,” he said.

AICC general secretary Randeep Singh Surjewala said, “This conspiracy of silence has meant that Haryana CM Manohar Lal Khattar and his Cabinet colleagues have not said a word of condolence on the deaths. Such leaders have no right to continue in power even for a day.”

Ahead of talks Punjab’s farm unions said they would burn copies of the three contentious farm laws on Lohri (January 13) and celebrate January 23—Netaji Subhas Chander Bose’s birth anniversary—as ‘Azad Kisan Diwas’. In other words, they believe they will be celebrating Lohri at the Delhi borders.

The 5 most important treaties in world history