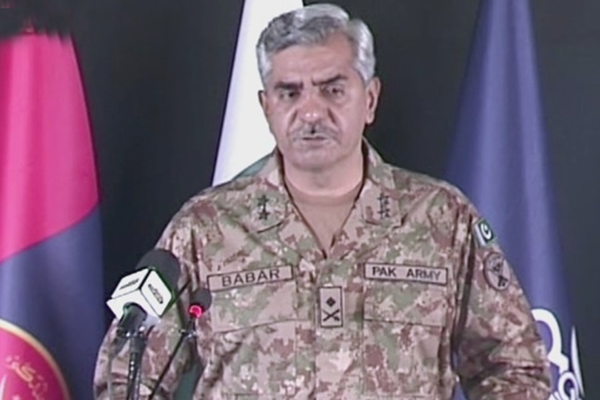 Rawalpindi: Pakistan witnessed a 45 percent reduction in major terrorism incidents in 2020 compared to 2019, Inter-Services Public Relations (ISPR) Director General Maj. Gen. Babar Iftikhar said adding that the peak of terrorist activity was recorded in 2013 and has been on a continuous decline since.

Addressing a press conference, he said that in 2013, Pakistan had recorded 90 major terror incidents, which had been reduced to around 30 today. Law enforcement agencies averted over 50 percent of the terror threats the country faced over the course of the last year, he added. He also highlighted the significant improvement in Karachi’s security situation, noting that terrorism incidents had declined by 95 percent, target killings by 98 percent, extortion by 99 percent and kidnappings by 98 percent.

The Army spokesman said the objective of the press conference was national security and the border situation, adding he wanted to present a comparative analysis of the past decade’s security challenges. “The last 10 years were a challenging time in every aspect for Pakistan,” he said, noting that in 2020 alone, the country had faced food insecurity and economic challenges owing to a locust invasion and the coronavirus pandemic.

Referring to India, Maj. Gen. Iftikhar said banned organizations “were being facilitated on the western border” but all challenges were being faced with a united front. “Despite all these challenges, the state, institutions, the armed forces and intelligence agencies and most importantly the Pakistani people unitedly faced these challenges,” he said, adding that in addition to restoring peace in tribal districts through military operations, socioeconomic projects had been launched for uplift.

He said Pakistan had taken concrete steps to solidify its borders with Afghanistan and Iran, adding, “as a result of successful operations against terrorism, the security situation improved considerably.” He noted 83 percent of the fencing along the Pak-Afghan border had been completed, while 37 percent had likewise been finished on the Pak-Iran border. He said the world was recognizing Pakistan’s efforts because the truth always prevails. “Whether it was India’s designs or hybrid warfare, whether the challenges were internal or external, we not only showed and identified [them] but also combatted them successfully,” he said.

Referencing Operation Raddul Fasaad, the armed forces’ spokesman said it had helped consolidate the achievements of the past decade. “Through this operation, the support base, facilitators, abettors, financiers and weapons were destroyed to a large extent. Thankfully, today in Pakistan, there is no organized terrorist infrastructure like in the past,” he claimed, adding that 371,000 intelligence-based operations were conducted in the last three years alone. “If we evaluate the manifestation of success, in 2007-08, only 37 percent of the areas in the tribal areas were under state control. Today, they have all become part of Khyber-Pakhtunkhwa,” he said.

On India and its activities along the Line of Control, the Army spokesman said that there had been a dramatic increase in ceasefire violations in the disputed region. “India has specifically targeted civilian populations, including children, women and the elderly,” he said, adding that there had been 285 civilian injuries and deaths in 2020 alone. “The peak of the past decade was in 2019,” he said. “Pakistan Army has always responded befittingly to all Indian aggression, which has resulted in heavy losses to life and armament for India,” he said.

Maj. Gen. Iftikhar said after its failure in achieving success in the “kinetic domain,” India had resorted to “fifth generation warfare.” Citing the dossier of India aiding and abetting terrorism in Pakistan, he said Delhi’s disinformation campaign had also been verified by an expose of the EU DisinfoLab. “In the past two decades, Pakistan has staged over 2,000 operations targeting terrorist organizations of all sorts,” he said, adding over 18,000 terrorists had been wiped out. He said the country had also introduced legislation to curb terrorism, and said intelligence-sharing had been done with over 70 countries.

“During the same period, India escalated its actions along the border with Pakistan,” he said. “In India-held Kashmir, it has committed human rights violations in the past year that are still ongoing,” he said, adding that in 2019 it had also tried to conduct an airstrike on Pakistani soil. “We have placed evidences of all our claims [against India] before the global community,” he said, summarizing the revelations of the EU DisinfoLab.

“India targeted Pakistan on six fronts [through its disinformation campaign],” said Maj. Gen. Iftikhar: social issues, Kashmir cause, terrorism, economic domain, diplomacy, and fomenting chaos. Referencing Kashmir alone, he said India had tried to falsely portray the abrogation of Article 370 as a positive for the people of the region. Similarly, he said, false propaganda was done on women’s rights in Pakistan, damaging the country’s international image. “This propaganda’s severity on a scale of 1 to 6 is a 6,” he said. “This should serve as a call to action for decision-makers to put in place relevant framework to sanction actors and governments abusing international institutions, influencing decision makers, and influencing world opinion,” he said of Pakistan’s expectations from the global community in light of the EU Disinfo Lab’s allegations of attempts to mislead the European Union.

Noting that the “enemy” had been trying to destabilize Balochistan recently, he said both the restive province and Khyber-Pakhtunkhwa were experiencing socioeconomic uplift. “We have moved from clear-and-hold to build-and-transfer,” he said, adding that 199 development projects worth Rs. 601 billion had been launched in Balochistan, including 42 transport projects.

Similarly, in Khyber-Pakhtunkhwa’s erstwhile tribal areas, 831 projects worth Rs. 31 billion have been launched, including 268 projects related to education, 70 to health, and 333 to water supply. He said the entire nation had also effectively combated the coronavirus pandemic, and praised the media for helping to educate the public about its effects and preventative measures.

“The challenges we overcame are now giving way to great benefits,” he said, but stressed that the country is not out of the woods yet. “But we are getting there.”

To a question, he said Balochistan was a “very large” area that required extensive resources to ensure safety. “In this regard, we have increased deployment there,” he said, adding it was not possible to appoint a sentry in every area. “But we will make sure that Balochistan is safe because it is the future of Pakistan,” he said. “That is how the government is looking at it.”

The armed forces’ spokesman said that security forces were not too concerned about the presence of the Islamic State militant group in Pakistan. “The operations we have done, and are doing, have made it very difficult for them to secure a foothold here,” he said, adding that it was mostly some groups who were trying to make a name for themselves by taking on the mantle of the militants.

To another question, he said Pakistan enjoyed very positive relations with the U.S., noting that the armed forces of both countries conducted regular “positive” exchanges. newsweekpakistan.