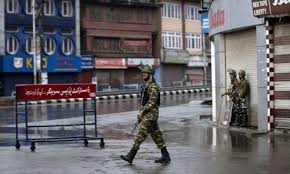 Srinagar: In Indian illegally occupied Jammu and Kashmir, Indian military siege has completed 17 months since it was imposed on August 05 in 2019, pushing the territory into hell.

According to a report 8 million Kashmiris continue to simmer under inhuman military siege, 305 fell to the Indian bullets since August 05, 2019. Over 95,700 Kashmiris killed by Indian troops from Jan 1989 till date.

The report pointed out that RSS-backed BJP govt of India wants to snatch away identity of Kashmiris through changing the Muslim-majority status of IIOJK into a Hindu majority territory.

Killings, raids, detentions and torture have become a norm in IIOJK, the report said and added that Indian courts are preparing for a judicial murder of illegally detained Aasiya Andrabi.

In connection with the Right to Self-Determination Day, today, the report said the UN January 05, 1949 resolution had upheld the Kashmiris’ right to decide their future through plebiscite, but India, for over seven decades now, had been flouting the UN resolutions by illegally occupying Jammu and Kashmir.