Another UN peacekeeper killed in Mali, marking the 5th in one week 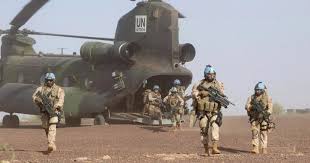 Kidal: A United Nations peacekeeper from Egypt was killed in Mali’s northern Kidal region and another was seriously injured, after their vehicle hit an explosive device during a logistics convoy, the U.N. said.

It brought the toll to five U.N. peacekeepers killed in northern Mali in just a week.

Another explosive device was found at the scene in Tessalit and disabled, the U.N. mission in Mali said late Friday.

Global Affairs Canada echoed Guterres’ comments, calling for Malian authorities to “identify and bring to justice the perpetrators of this attack” in an emailed statement to Global News.

“Canada is concerned by the recent attacks on and deaths of UN Multidimensional Integrated Stabilization Mission in Mali personnel,” the statement read.

“We condemn the use of violence and call on all parties to engage in a peaceful and inclusive dialogue, and to respect democratic institutions.”

Click to play video ‘Is Canada’s mission peacekeeping or counterterrorism?’

Jason Kung, a spokesperson for GAC, confirmed that all Canadian peacekeepers deployed the UN’s mission in Mali were “safe and accounted for,” extending Canada’s condolences to the families and loved ones of the victims.

Four peacekeepers from Ivory Coast died from an improvised explosive device and an attack Wednesday by unidentified gunmen in the Timbuktu region. The U.N. said six were wounded.

The peacekeeping mission has been in Mali since 2013, after Islamic extremists took control of major towns in the north. A French-led military operation dislodged them, but the jihadists have since regrouped in rural areas and expanded their reach.

The U.N. says more than 231 peacekeepers in Mali have been killed due to hostile incidents, in what has become known as its most dangerous mission.