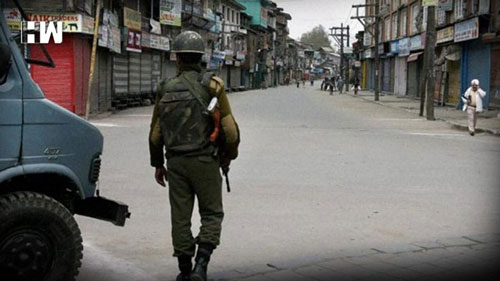 Srinagar: The All Parties Hurriyat Conference has appealed to the freedom-loving people of Kashmir to observe a complete shutdown on Wednesday against the expected visit of a selected European parliamentary group to the territory at the behest of India to hoodwink the international community.

The APHC in a statement issued after the meeting in Srinagar maintained that the said parliamentary delegation had been the hostage of the Indian hospitality at the cost of the plight of the Kashmiri people. Call for the strike has been given by the APHC at its Majlis-e-Shoora meeting, which was presided over by its working Vice Chairman, Ghulam Ahmad Gulzar.

The meeting resolved that the Kashmir dispute was on the table of the United Nations for the final settlement in accordance with the aspirations of the people of Kashmir so the European delegation had no locus standi to become a supporter of an aggressor and a violator of the UN Human Rights Charter. The meeting urged the United Nations and the world community to impress upon India to stop the genocide of the Kashmiri people.

It expressed its grave concern over the deteriorating situation in IIOJK after the onslaught of 5th August 2019, wherein people remained caged under the worst military siege. The people of Kashmir remain confronted with a hellish situation and the political leadership along with their cadres has been placed in death cells in a pathetic and humiliating condition in various jails of India, it added. The meeting, while condemning the inhuman behaviour and political vendetta displayed by Modi-led fascist Indian government, warned that if anything untoward happened to the jailed leaders, people would not remain silent spectators.

It expressed deep concern over the fresh spell of suppression and repression carried out in the name of cordon and search operations in Rajouri, Poonch and whole Chenab Valley. The meeting observed that the ill-designs of the biased administration under the influence of communal forces are selectively targeting the Muslim population especially the young generation.

The meeting urged the United Nations and the world community to impress upon India to stop the genocide in Kashmir and the plight of the incarcerated leaders and activists, languishing in Indian jails.

Pakistan ‘persistently contributing to peace, stability in the region’, says...

Pakistan demands UNSC to use its mechanisms to promote solutions...