ASIYA ANDRABI – A VICTIM OF INDIAN STATE TERRORISM IN KASHMIR 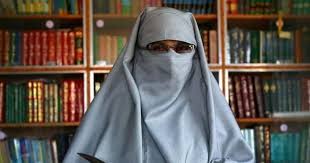 According to latest media reports, a special court in Delhi has granted Indian investigation agency 10-day police custody of Asiya Andrabi and her two associates Nahida Nasreen and Sofi Fahmeeda – all belonging to Dukhtaran e Milat, a group of Kashmiri women struggling for their fundamental rights. The trio was brought from Central Jail in Sringar to Delhi.

Asiya Andrabi has proved herself a devoted leader for the rights of the Kashmiri people. Over the years she has emerged as the face of women rights movement in Kashmir. The Kashmiri leader was arrested in a case registered by NIA in April 2018 for her political activities. This was one of the first key arrests by the Indian security authorities since Governor’s Rule was imposed in occupied Kashmir. Aasiya Andrabi runs Dukhtaran-E-Millat (DeM) with the help of her associates Sofi Fehmeeda and Nahida Nasreen. The DeM is struggling for the right of self determination of the people of the occupied valley. On December 21, 2020, a Special Judge ordered putting Andrabi and her associates — Sofi Fehmeeda and Nahida Nasreen — on trial on trumped up charges of anti-state activities.

Meanwhile, Pakistan has expressed deep concern over the deteriorating health condition of incarcerated Kashmiri leadership in Indian jails and called upon the international community and human rights bodies to take notice of the Indian government’s inhuman treatment of the Kashmiri leaders, and raise voice for their immediate release from illegal detention. A Foreign Office statement said:

“Pakistan is deeply concerned over the continued incarceration and deteriorating health conditions of Kashmiri leaders including founding leader of Kashmiri organization ‘Dukhtaran-i-Millat’ and the ‘Iron Lady of Kashmir’, Asiya Andrabi; leader and founder of the Jammu & Kashmir Democratic Freedom Party, Shabbir Ahmed Shah; and prominent leaders such as Yasin Malik; Masarat Alam Bhat; Mohammad Ashraf Sehraie and others, who have been languishing under squalid conditions in the midst of the Covid-19 pandemic in infamous Tihar and other jails.”

It may be noted that many other senior Kashmiri leaders including Syed Ali Shah Geelani and Mirwaiz Umar Farooq remain under house arrest. These Kashmiri leaders have been illegally arrested over malicious, false and fabricated charges by the Indian government by invoking draconian laws promulgated in Indian Illegally Occupied Jammu & Kashmir (IIOJK).

Needless to say, imprisonment and torturing of Kashmiri leaders on the basis of their political ideology and struggle against illegal Indian occupation is a true reflection of the extremist mindset of the RSS-BJP regime, which has no respect for the human rights of the Kashmiri people. In this context, it is important to note that the international community, particularly the United Nations, ICRC and human rights and humanitarian organisations, should take notice of the Indian government’s inhuman treatment of the Kashmiri leaders and raise its voice for their immediate release from illegal Indian detention.

To recall in April this year, the International Federation for Human Rights – FIDH asked Modi government to release all arbitrarily detained Kashmiri prisoners. The FIDH said in a statement released simultaneously from Geneva, Paris, and New Delhi on April 6, 2020 emphasised that Indian authorities should release all unjustly detained prisoners as a matter of priority. According to reports, inmates and prison staff, who live in confined spaces and in close proximity with others, remain extremely vulnerable to Covid-19. While the rest of the country is instructed to respect social isolation and hygiene rules, basic measures like hand washing – let alone physical distancing – are just not possible for prisoners. Under international law, India has an obligation to ensure the physical and mental health and well-being of inmates. The jailing and trial of Asiya Andrabi is typical of the high-handed manner in which the BJP government is dealing with the people of occupied Kashmir.