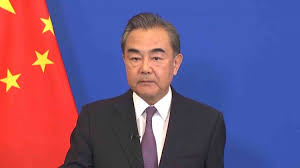 Beijing: China hopes that hotspot issues will be made to cool down and peace talks will bring true peace, said Chinese State Councilor and Foreign Minister Wang Yi.

He made the remarks in a recent interview with Xinhua News Agency and China Media Group.

Wang said that peace is an eternal aspiration of humankind, and as a permanent member of the UN Security Council (UNSC) and a responsible major country, China has been exploring a distinctive Chinese way of resolving hotspot issues.

“We follow a vision of common, comprehensive, cooperative and sustainable security for the world. We maintain that regional disputes should be addressed through dialogue and consultation. We uphold non-interference in internal affairs, which is a basic norm governing international relations. We speak for justice from an objective and sensible perspective. We seek solutions that suit the regional reality and accommodate the interests of all parties. We have done what we can to safeguard peace and tranquility in the world,” he said.

Over the past year, while firmly upholding the Joint Comprehensive Plan of Action (JCPOA) on Iran’s nuclear program, China has joined the international community in opposing moves inconsistent with the UNSC resolutions, Wang said.

He noted China has put forward a constructive proposal of building a new platform for multilateral dialogue for the Gulf region, given steadfast support to Palestine’s just cause and firmly upheld the right direction of the “two-state solution,” continued to advocate the phased and synchronized approach to achieve the two goals of denuclearization of the Korean Peninsula and establishment of a peace mechanism, facilitated consensus-building on Afghanistan’s national reconciliation and that among regional players, and supported intra-Afghan talks, as well as mediated between Bangladesh and Myanmar in addressing their disagreements, and assisted in maintaining overall stability in northern Myanmar.

As for major countries that play a key role in various hotspot issues, he hoped instead of anyone’s own selfish interests, they can bear in mind the real interests of regional countries and the well-being of all people in the world, and shoulder due responsibilities and play a constructive role in settling disputes.Bignewsnetwork.com