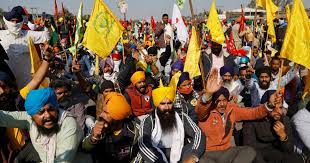 Hundreds of B.C. farmers took part in a convoy on New Year’s Day to show solidarity for farmers protesting in India.

The farmers gathered at Bear Creek Park in Surrey afternoon before the car convoy left for downtown Vancouver.

Participants say the new year brings a new style of ways they can show their support.

“With the other ones before, you had a lot of chanting with Khalistan or you had different slogans that were being said or yelled out through the microphones — either in support of the farmers or the religious beliefs — but this one is just going to be more praying,” participant and volunteer Kuljinder Singh Gill told Global News. “There won’t be shouting this time.

Rallies to show support started in B.C. on Dec. 5 and this is the 34th day something has been happening locally.

Supporters say they will not give up until a deal is reached.

India has one of the highest rates of farmer suicides in the world, often driven by debt. The decades-long problem has hit a boiling point.

The Indian government’s recently-passed agriculture laws are widely perceived by protesting farmers as unjust, eliminating what many consider their minimum wage.

But the Indian government has argued the laws will improve farmers’ incomes, giving them a wider market to sell to.

The use of brute force by police, who have deployed tear gas, barbed-wire barricades and batons on peaceful protesters, has drawn international condemnation, including from Prime Minister Justin Trudeau.

Millions around the world have been standing in solidarity with the farmers and their right to peacefully protest. Global News.ca