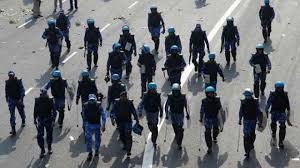 New Delhi: The Indian capital turned into a militarized zone on Wednesday with a heavy presence of police and other law enforcement agencies to maintain law and order a day after violent clashes with protesting farmers who stormed New Delhi’s Red Fort and hoisted Khalistan flag.

The violence marked a dramatic escalation in a standoff between the government and thousands of farmers camped out on the outskirts of the city since late November.

The farmers, mostly from northern Indian states including Punjab, want new agricultural reforms scrapped that they fear will leave them at the mercy of big corporations.

On Tuesday — during annual Republic Day parade — convoys of farmers on tractors smashed through barricades to converge on the city centre, seeing off police baton charges and volleys of tear gas.

One farmer was killed in what police said was an accident after his tractor overturned after hitting a barricade. At least 86 police were injured, an official statement said.

Around the city, security forces fought running battles with demonstrators. Farmers also laid into police with branches and metal bars and hijacked buses used to block their convoys.

At the historic Red Fort landmark farmers broke through police lines and put up their own emblem on the flagpole to cheers from the large crowd before being dispersed from the ramparts by security forces.

On one main road, people on rooftops threw petals on the tractor convoys. Elsewhere people cheered and applauded as farmers went past waving Indian flags and blowing horns.

As night fell, the farmers retreated to the camps outside the city where they have been braving Delhi’s chilly winter nights since late November.

Home Minister Amit Shah ordered 15 companies of paramilitaries to boost security forces in the capital, according to media reports.

On Thursday morning a number of major roads were blocked by police and security forces set up barricades, leading to major traffic congestion. Riot police were stationed near the Red Fort.

Smaller farmer demonstrations were held in Mumbai and Bangalore and in the rural state of Haryana on Tuesday.

The unrest was a major embarrassment for Prime Minister Narendra Modi’s Hindu nationalist government, for whom the farmer protests represent the biggest challenge since coming to power in 2014.

Farming has long been a political minefield, with nearly 70% of the population drawing its livelihood from agriculture in the vast nation of 1.3 billion people.

The government has offered to suspend the reforms for 18 months, but farmer unions — who insist they did not condone Tuesday’s violence — want nothing short of the laws being binned.

The government says that the farmers have been manipulated by opposition parties which have largely backed the protests.

It insists the reforms will allow farmers to sell to private buyers instead of just at state markets.

Ten rounds of talks between farm unions and ministers have failed to break the deadlock.

Singh, a “Nihang” Sikh warrior wearing an electric-blue robe and a foot-high turban, had a clear message for the government.

“We’re ready to die. This government has been ignoring us for long but they can no longer do that,” Singh told AFP at the 400-year-old fort.

Majid Ali, 55, who lives near the Red Fort said he was appaled by what happened at the landmark but backs the farmers.

“I’ve never seen this much security in my life… If the farmers don’t fight for their rights and lives, how will we eat? I am with the farmers,” Ali told AFP.