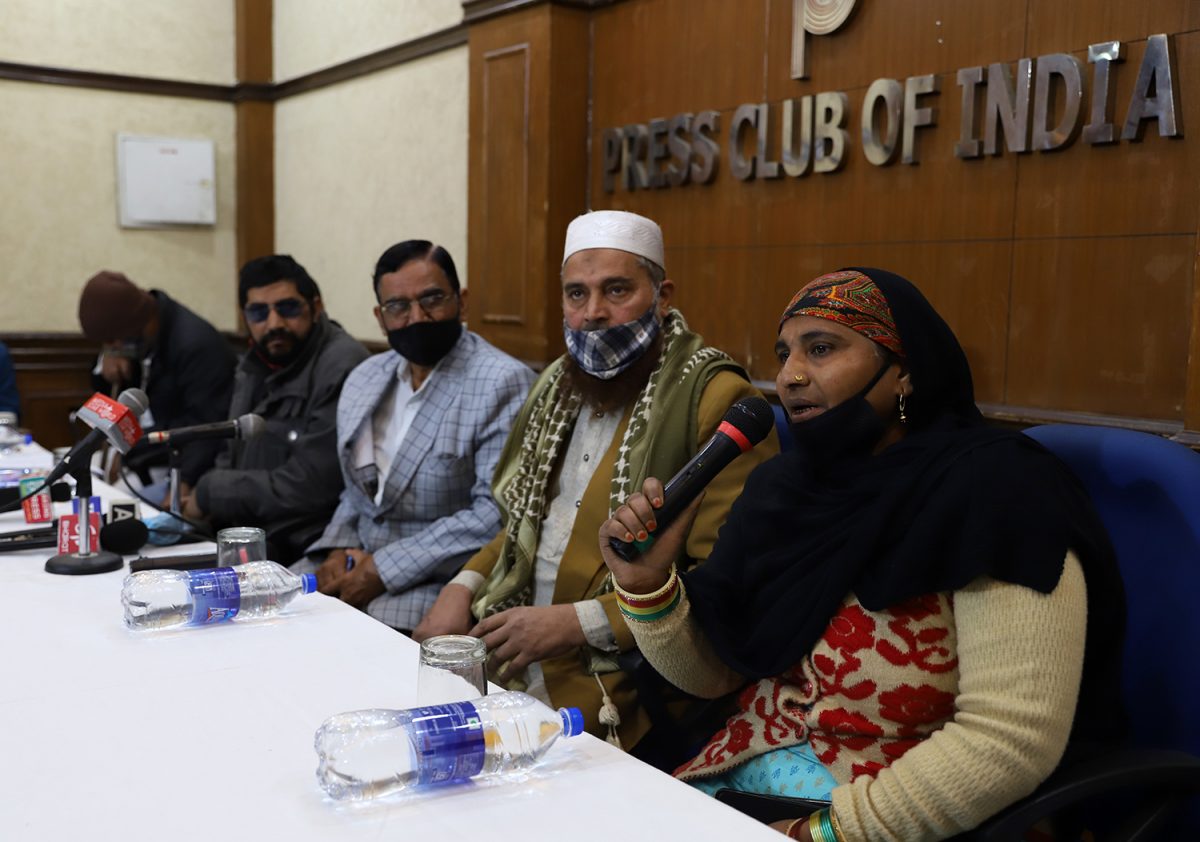 New Delhi: Shanno, a resident of Subhash Mohalla who had accused Bhajanpura police officials of assaulting her and her teenage daughter inside the station premises, addressing a press conference following a raid by the Delhi Police Special Cell at the office of her lawyer, Mehmood Paracha. On 25 December, around ten victims of the Delhi violence, all of whom are represented by Pracha, held a press conference at the Press Club of India in the light of the police raid.

On the evening of 25 December, around ten victims of the Delhi violence held a press conference at the Press Club of India in light of the Delhi Police Special Cell’s raid at the office of their advocate, Mehmood Paracha, the previous day. Pracha is a defence counsel in several cases arising out of the violence that swept northeast Delhi violence in February this year. According to Paracha, the cases he handles show the complicity of the Rashtriya Swayamsevak Sangh cadre, the Delhi Police and the ruling Bharatiya Janata Party leaders in the February violence. At the press conference, the victims described how the police was pressurising them to withdraw their cases, or change their lawyer and submit a statement that Paracha made them file false complaints. Sahil Parvez, one of the victims and Paracha’s client, said that the Special Cell’s raid was “just to create pressure on us, so that we back down.”

Over twenty police officials arrived at Pracha’s office, located in Delhi’s Nizamuddin East area, around noon on 24 December and left at around 2.45 am the next day. While addressing the media post the raid, in the early hours of 25 December, Pracha said that the officials demanded to seize his computer and manhandled him. “I did not want to give them my computer because it contained a plethora of videos and other evidence,” he said. Pracha added that the raid was an attempt to stop him from pursuing these cases.

Many of his clients had been threatened just because he was taking their case, Pracha said. He told the press he could give a “dozen of examples of people who have been falsely implicated because they came to me and tried to get cases registered against the police, against RSS’s members.” According to him, the police have threatened his clients, “Remove Pracha from this case or we will kill you, implicate you in false cases.” The riot victims who addressed the press conference reiterated these allegations against the police. The conference was held at 4 pm, but received scant media presence.

Each individual who spoke at the press conference described how the police had failed them and refused to investigate their complaints about the Delhi violence. The individuals included Khursheed Saifi and Feroze Akhtar, who had survived the attack by Hindu rioters and security personnel on the Farooqia Masjid—in the Brijpuri area of northeast Delhi’s Mustafabad locality—during the February violence. On 25 November, The Caravan reported how the Delhi Police was yet to register a first-information report against complaints about the attack. Saifi and Akhtar had filed complaints accusing the Delhi Police and naming rioters involved in the attack. But the only FIR registered into the communal attack appeared to ignore their complaints.

At the conference, Saifi and Akhtar spoke of how the police threatened them to alter their FIR’s to falsely implicate Pracha. Saifi said he had approached Pracha after the police refused to register his complaint. He said he had identified three members of the armed mob by name. “Police would pressurise me—‘Do you know the people who you have named in the complaint?’ I said yes. ‘What if names are removed from it?’” he said. “They wanted me to change my testimony.”

According to Saifi, the police had directly asked him to switch his lawyer and “give a statement that whatever three names are written in your complaint, they are false.” He said policemen regularly visit his shop and threaten him: “You didn’t change, we will see you”; “We will get your shop shut”; “Give a false testimony against Pracha and we will leave you or we will implicate you in the riots”; “We will kill you.”

Akhtar said he recently shifted houses because he was being harassed by the police. “They misbehaved with my wife, my children,” he added. Akhtar said when the police found out that Pracha was his lawyer, the family was subjected by random attacks, including an incident where his son was beaten up by unknown individuals. One time, Akhtar said, “I was on a scooty and I was thrown down, and they told me, ‘Take your case back.’”

He said that he once received a call from a police station, though he could not remember the name, seeking to implicate Pracha in a case. According to Akhtar, the caller said, “If you are fighting the case, should we get your lawyer changed?” The caller continued, “We will give you a lawyer. Which all statements have you given that Mehmoodji has made you write?” Akhtar said he replied that these were his own statements. The caller responded, “At least some lines must have been narrated by Mehmood bhai?” Akhtar reiterated that the statements were his own, at which point the caller pointed out that Akhtar was handicapped, did not own a house and had been treated in a private hospital. “If we help you a bit, would you be willing to add something in your FIR?” the caller asked.

Another victim and one of Pracha’s clients, Mohammad Saleem, said his house was attacked during the violence and since then he has been implicated in five cases. According to Saleem, around 15­–20 people once came to his house and asked him to withdraw his complaint. After he refused, he said a policeman visited him and said, “You went to Mehmood Pracha … Take the complaint back and say that he made us file a false things in the complaint.” He said the police harassment had scared him so much that he was afraid of going home.

Mohammad Mumtaz was also among the victims present at the conference. Mumtaz, a resident of Khajuri Khas, was at his family-run restaurant, Sanjar Chicken Corner, when a Hindutva mob of over hundred people began pelting stones at it. The Caravan reported in September that in a complaint to the commissioner of the Delhi Police, Mumtaz stated that he had seen the BJP MLA Mohan Singh Bisht among the Hindu rioters that night. At the conference, Mumtaz said the police had told him that his FIR would not be registered with names of the assailants even though he could identify them. Mumtaz said the police told him, “You get a simple FIR registered if you want, or go home.”

At the conference, Mumtaz said that he approached Pracha after he heard that the lawyer was fighting cases “free of cost” for the poor. “My uncle, Mehboob Alam sahib, he has been implicated in a false case and locked up in Mandoli jail,” he said. “He was tortured so much. … He was told, ‘Take back your case or you will be tortured more. Your family will be locked up.’” Mumtaz said he was directly pressurised as well. ‘They ask us to take our case back,” Mumtaz said, referring to associates of the MLA Bisht. And say that Mehboob Pracha has made you file a false case. Whatever money you want, we are willing to give it to you.’”

Wasim, a teenager, was the youngest client present at the conference. The assault on him was recorded in a viral video which showed policemen beating five injured men and ordering them to sing the national anthem. “Policemen keep telling us to take the cases back, you will be picked up, killed on the way somewhere,” Wasim said. “Policemen keep pressurising us. What happened yesterday—he is fighting for us, we stand with him. Policemen say this only, ‘The person you are going to … He will also be trapped, so will you and you will be shot down.’” Caravan Magazine