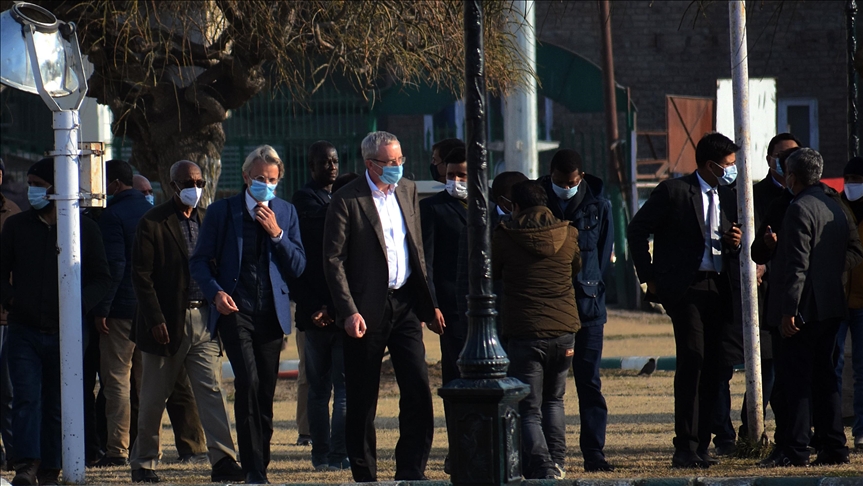 Srinagar: A delegation of foreign envoys, including from African, European and Latin American countries, began their two-day tour of Indian-administered Kashmir amid an increased blanket of security and a spontaneous shutdown in some parts of the region.

The envoys were driven to a college in central Kashmir’s Budgam where they met a select number of people, including the recently elected local body representatives.

After visiting the college in Budgam’s Magam town, where residents observed a shutdown, the envoys visited the historic marble mosque on the banks of Srinagar’s picturesque lake.

This is the third visit by foreign envoys to the region since the August 2019 abrogation of Kashmir’s limited autonomy by New Delhi, implemented with a crippling lockdown and communication blackout that lasted several months.

Mehbooba Mufti, a former chief minister of the region and president of the Peoples Democratic Party (PDP), termed the visit “event management by the BJP government”.

It doesn’t mean anything,” Mufti told Al Jazeera. “It is a guided tour for which they [Indian government] selected people for the meetings. It’s not like whoever wants to talk can go.”

Mufti said the purpose of the visit appeared “to show the sense of normalcy in Kashmir”.

“We are not being allowed to meet families of victims of human rights violations. This is artificial and a facade.” A team of 23 Members of the European Parliament, some of them from far-right parties, visited Kashmir in October 2019, three months after the abrogation of Article 370. Al Jazeera