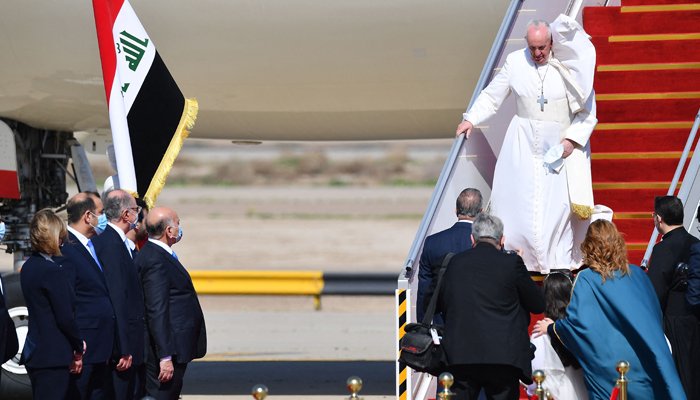 Baghdad: Pope Francis landed in war-battered Iraq Friday on a first-ever papal visit, defying security fears and the pandemic to comfort one of the world’s oldest and most persecuted Christian communities.

The 84-year-old, who said he was travelling to Iraq as a “pilgrim of peace”, will also meet Iraq’s top cleric, Grand Ayatollah Ali Sistani.

The pope left Rome early Friday for the four-day trip, his first abroad since the onset of the Covid-19 pandemic, which left the leader of the world’s 1.3 billion Catholics saying he felt “caged” inside the Vatican.

“I’m happy to resume travel, and this symbolic trip is also a duty to a land that has been martyred for years,” he told journalists aboard his plane.

His plane landed at 1:55 pm (1055 GMT), waving the flags of both Vatican City and Iraq as it taxied on the tarmac at Baghdad International Airport, where Prime Minister Mustafa al-Kadhemi greeted him.

“With love and peace, Iraq’s people and government are welcoming His Holiness Pope Francis and reaffirming the depths of this humanitarian bond,” Kadhemi said ahead of the pope’s arrival.

While Francis has been vaccinated, Iraq has been gripped by a second wave of infection with 5,000 plus new cases a day, prompting authorities to impose a full lockdown during the pontiff’s visit.

“I’ll try to follow directions and not shake hands with everyone, but I don’t want to stay too far,” Francis said ahead of his arrival.

Security will be tight in Iraq, which has endured years of war and insurgency, is still hunting for Daesh sleeper cells and just days ago saw a barrage of rockets plough into a military base.

Francis will preside over a half dozen services in ravaged churches, refurbished stadiums and remote desert locations, where attendance will be limited to allow for social distancing.

Inside the country, he will travel more than 1,400 kilometres (870 miles) by plane and helicopter, flying over areas where security forces are still battling Daesh remnants.

For shorter trips, Francis will take an armoured car on freshly paved roads that will be lined with flowers and posters welcoming the leader known here as “Baba Al-Vatican”. Reuters