Subscribe Us
HomeArticleHindutva: a looming threat to minorities in India
Article

Hindutva: a looming threat to minorities in India 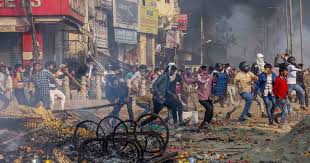 February reminds us of the brutality and savagery that hit Delhi’s northeast a year ago. A crusade against the Muslims was launched which resulted in the death of 53 innocent people. Hindu mobs attacked peaceful Muslims protesters signifying the demise of the much-claimed secular India. The said act unveiled the genesis of an extremist/fascist India as it modified its citizenship laws via which all Indian refugees excluding Muslims that arrived in the country before December 2014, are entitled to the country’s citizenship.

This amendment brought colossal repercussions as the Muslim community felt betrayed and singled out. The resultant protests did not sit well with Hindu extremists as they pummeled the peaceful protesters. Muslims were assaulted, their homes ransacked, businesses destroyed and loved ones sent back to the Lord. The BJP government renowned for its fascist manifesto was the silent orchestrator of the whole ordeal. After the violence had abated, the radical Hindu syndicate played the victim card in an endeavour to reshape the accounting/narration of events. This further escalated hostilities against the Muslims. This heinous act has been condemned by numerous countries and human rights organisations.

Ever since Narendra Modi’s ascension to the Prime Minister’s Office, crimes targeting minorities have burgeoned. There are numerous reasons behind this act of antagonism but it all trickles down to the mantra of the ruling party — Hindutva. This notion of Hindu supremacy has spread like wildfire and has engulfed the country completely. The minorities are suffocating due to its poisonous nationalistic, religious and chauvinistic fumes.

Excessive nationalism orchestrates authoritarianism. Hindutva preaches dominance of Hinduism over other religions. It says Hindus belong to a superior race and have the right to rule over others. It differentiates between Hindus and non-Hindus with racist pronouns like ‘us’ and ‘them’. It calls for a pro-Hindu India with no place for minorities. They are regarded as outsiders that have adulterated Mother India. RSS and consequently, its political wing, the BJP, endorse this ideology. They assault the splinter groups of the country and try to forcefully revert them to Hinduism. The logic is that foreign religions have corrupted the true Indians and they require re-enlightenment and guidance.

Such venomous notions breed catastrophes and damage the thin fabric of society. India’s ongoing incursion of laws targeting minorities have sparked protests which mushroom into riots after RSS goons get involved. Religious prejudice has brought the Muslim and Sikh communities face to face with the government. The seeds of the second edition of Quit India have been sown and India’s own rulers are watering the soil. Modi’s fascist policies are reminiscent of Hitler’s. The bubble of stability he has blown around himself will detonate soon, taking with it India’s falsely projected image of a secular, peaceful and blissful state.

The question that should be raised about the above lamentable events is that why the international community remains silent. Capitalistic ideologies have led to the demise of remorse and humanity. India’s population makes it a booming market, and this has blinded and deafened all world leaders. The war against minorities rages on while the world ganders as a mere spectator. Does the silence pertain to the fact that the target is the Muslim population? If so, then why is the Muslim community not voicing their views on this subject? This portrays the influence of a piece of paper over humanity. “The only crime equaling inhumanity is the crime of indifference, silence, and forgetting.” This tranquility will have catastrophic outcomes for the Muslim ummah. The Express Tribune