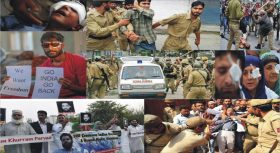 Jammu: The Chairman of Jammu and Kashmir People’s Association (JKPA), Aquib Wani has said that minorities, in India, are fearing extinction because of the rise in mob lynching, cow vigilantism, honor killing and other such incidents.

Talking with newsmen, Aquib Wani said, “India is becoming a brutal authoritarian state which can be judged by recent oppression against protesting peasants on India’s Republic Day which has exposed the myth of India’s claim of world’s largest democracy.”

Aaquib Wani further said that to pursue its evil agenda of Hindutva, RSS and BJP have unleashed a reign of terror against Muslims, Sikhs, Dalits and other minorities.

Meanwhile, APHC leader Devinder Singh Behl in a statement in Jammu asked for resolving the Kashmir dispute through talks among Pakistan, India and true representative of the Kashmiri people.

Hindutva: a looming threat to minorities in India