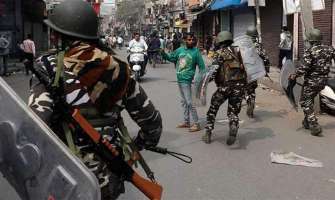 Srinagar: All Parties Hurriyat Conference (APHC) has expressed deep concern over the unending Indian state terrorism saying that New Delhi has thrust a full-fledged war against the people of Kashmir especially in Shopian, Kulgam and Pulwama districts.

In a statement, APHC Working Vice Chairman, Ghulam Ahmed Gulzar condemned the gruesome killings, setting ablaze whole villages by using gunpowder, chemical weapons and other explosives, and termed the military operations as the worst war crimes against humanity in IIOJK. He urged the United Nations Secretary General and world human rights forums to take urgent steps to stop the use of brute military power against civil population engaged in a legitimate struggle to secure their inalienable right to self-determination.

Ghulam Ahmad Gulzar expressed hope that the global institutions would fulfill their obligations to help resolve the long pending Kashmir dispute. Lauding the unwavering attachment of the Kashmiris especially the people of South Kashmir with their freedom movement, Ghulam Ahmed Gulzar, paid rich tributes and salutes for the bravery and courage which they displayed for the past 73 years against the Indian military might. He said India has morally lost its war in IIOJK.