IIOJK police officers up in arms against Modi regime’s attitude 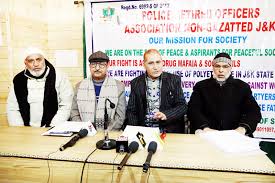 The representatives of Non-Gazetted Police Officers Association have expressed their anger at the Modi regime through a press conference in Srinagar, the other day.

Criticizing the Modi regime, who is represented by Manoj Sinha in IIOJK, these police officers said that their long-pending grievance regarding pay anomaly and indiscriminate treatment have gone unnoticed and unattended.

“We have been raising the matter repeatedly with the Police Headquarters, the Home Department and the Finance Department, but to no avail,” the President of the Association said.

Family of jailed Asiya Andrabi fears for her safety