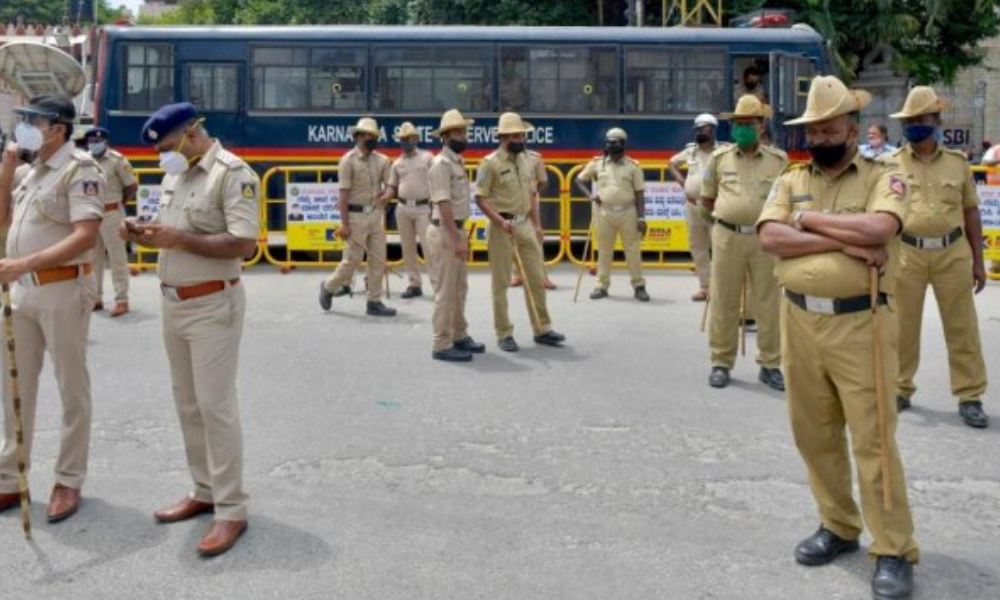 Bengaluru: After a lull of over two years during the pandemic, the police have launched a fresh drive to identify and extradite undocumented Bangladeshi migrants in the outskirts of Bengaluru. Reports came in about raids over the past weekend on shanty settlements in Sarjapura, Anugondanahalli and Hebbagodi police limits, which fall under the Bengaluru Rural police limits.

As with previous such crackdowns, the exercise got complicated by the fact that it is virtually impossible to distinguish a Bangladeshi from an Indian Bengali hailing from the regions along the international border. Bengali speaking Muslim migrants who were rounded-up over the past weekend complained that the police resorted to unprovoked violence, damage to property and segregated suspects based on religion. These claims were however categorically refuted by the police.

“Around two dozen policemen suddenly barged into our camp and attacked us with batons on Saturday (May 21). It was around 4 pm and we had just finished our day’s work when they came and started roughing us up. They wanted us to pack-up and leave immediately,” said Tubar Seikh (34) who lives in a settlement of 30 Bengali Muslim families that collect and segregate garbage for a living. In a serious charge, he also said that there were only male police personnel during the raid in which women too were frisked and asked to produce their documents.

Meanwhile, news of the drive has spread and reportedly caused panic among the thousands of Bengali speaking Muslims, who majorly make a living from collecting and segregating the city’s garbage. R Khaleemulah, a human rights activist, said that he has been receiving numerous calls from frantic labourers who wanted to know if it was safe to continue living in the city. The last major police crackdown was in 2019 and had led to a mass exodus of these workers from the city.

Refuting allegations of religious profiling, Bengaluru Rural Superintendent of Police (SP) Kona Vamsi Krishna insisted that the objective is only to identify illegal migrants, “Not at all…no way; there is absolutely no question of us targeting people on the basis of religion. We are conducting preliminary identification drives, only asking questions.”

Seikh also claimed that the Anagondanahalli police who conducted the raid did not relent and ordered them to leave the city even after they produced their Aadhaar cards and other documents establishing their Indian identity. He said that all the families in the settlement are part of the same clan and hail from the Malda-Murshidabad region of West Bengal, which is close to the Bangladesh border. “Of the 100 people in our camp, half are involved in door-to-door collection of garbage for the BBMP (Bruhat Bengaluru Mahanagara Palike). We have been doing this work in the city for more than a decade, we have all the documents,” he said.

SP Vamsi Krishna, however, expressed scepticism about the migrants’ claims about their documents. He said that the police are verifying documents but would employ other means to establish nationalities as it is “easy to get local documents.” Asked how the department intended to establish identity when documents weren’t reliable, he said, “It is too early in the process to answer these questions.”

However, the police action appears to have been quite different in one of the shanties in Dommasandra occupied by Bengali Hindus, which was also raided on Saturday. Ajith Majumdar (40) lives in the Dommasandra camp along with 25 other Hindu Bengali families who are all into garbage segregation. “The police first barged in aggressively mistaking us to be Muslim,” he told TNM on Monday, “They calmed down when we said we are all Hindus. They saw our documents and left.”

Majumdar also confirmed that the police had not been so kind to neighbouring shanties where Bengali Muslims live. “We also come from the Malda-Murshidabad region just like the others. Our language, food, dressing is all very similar and we all do the same work,” said Majumdar , who belongs to the Dom community in West Bengal that is categorised as a Scheduled Caste (SC). “They also work hard like us, it is not like they are criminals so I don’t understand why the police should bother them,” he said, expressing solidarity with his Muslim neighbours.

Hindus like Majumdar are rare in the extremely hazardous industry around the garbage collection and segregation in the greater Bengaluru metropolitan region. A bulk of the workforce is made up of Bengali speaking Muslims. They are a source of raw material for recycling companies and also form the backbone of the BBMP’s doorstep-to-dumpyard operation across the city.

“These Bengali migrants are an endless source of highly subsidised labour. The profits they generate through garbage result in thousands of crores of rupees for people at the top of the supply chain. This money is shared by civic officials, recycling companies and politicians,” said R. Kaleemullah, who has been providing legal assistance to these communities ever since the anti-Bangladeshi drives started a few years ago.

Anand Reddy has been renting out a one acre plot for more than a decade to a group of Bengali Muslim families in his village Muthusandra in Hoskote Taluk outside the city. “The police came and tried to chase them away last weekend. They warned me that I should not employ Bengali Muslims as they could be Bangladeshi,” he told TNM. Reddy runs a recycling unit that produces plastic granules. “The raw material comes from the Bengalis and we have a good working relationship. They don’t cause trouble to anybody,” he said, “These police raids happen because the politicians make an issue out of it. But the fact is that all politicians benefit from the garbage business which cannot run without Bengali Muslims.” The Wire

No justice for Muslims from Indian Kangaroo courts: Mushaal Malik