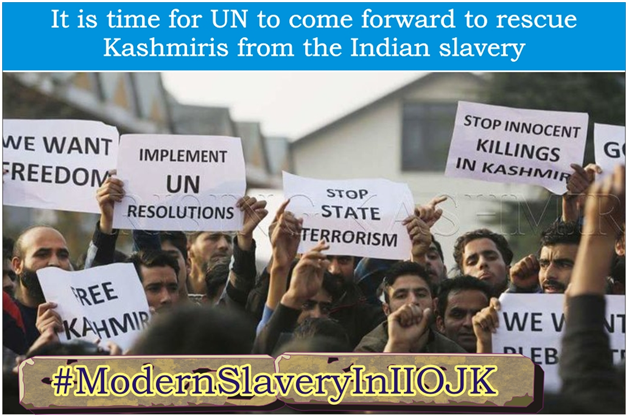 Islamabad: As the world observes international day for abolition of slavery, India continues to treat the people of Indian illegally occupied Jammu and Kashmir as slaves.

A report released by the Research Section of Kashmir Media Service said, the UN Day for the Abolition of Slavery being observed today is aimed to end slavery in the world. However, it said, millions of Kashmiris are subjected to forced slavery under Indian occupation.

The report said that practice of human slavery was witnessed in its worst form in IIOJK and sexual exploitation of Kashmiri women was also a part of slavery in the occupied territory.

“Indian tactics of subjugating the Kashmiri people are going to fail sooner or later as Kashmiris are determined to break the shackles of Indian slavery. Kashmiris will prefer death over becoming slaves of Hindu fanatics,” it added.

The report maintained that the people of IIOJK are destined to get freedom from Indian subjugation. “It is time for UN to come forward to rescue Kashmiris from the Indian slavery. UN should stand with just cause of Kashmir and play role in resolving the lingering Kashmir dispute according to will of Kashmiri people,” it maintained. KMS