Indian atrocities in Kashmir is a threat to regional peace: FO 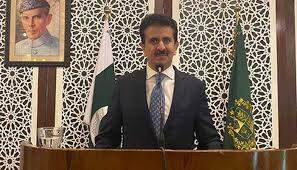 Islamabad: Pakistan once again warned the world that Indian actions were endangering region’s peace as it reaffirmed commitment to friendly ties with all neighbouring countries.

“Pakistan’s message is clear and consistent. We want peace and desire cordial relations with all our neighbours. Pakistan belie­ves that India’s irresponsible actions and belligerent statements are imperiling regional peace and security,” Foreign Office spokesman Zahid Hafeez Chaudhri said at a media conference.

He was responding to a question about Pakistan’s message for the international community on the first day of the new year.

Mr Chaudhri said India vitiated the atmosphere with its illegal and unilateral actions of Aug 5, 2019 in Occupied Kashmir and through its continuous belligerent rhetoric.

“Pakistan has repeatedly been saying that the onus is on India to create an enabling environment by rescinding its illegal and unilateral actions, ending state terrorism against the Kashmiri people, and agreeing to resolve the Jammu and Kashmir dispute in accordance with the relevant UN Security Council resolutions and the wishes of the people of Kashmir,” the spokesman said.

Earlier in the day the two countries exchanged lists of nuclear installations and each other’s nationals being held by them as prisoners.

The exchange of lists of nuclear installations was done under Article-II of the Agreement on Prohibition of Attacks against Nuclear Installations and Facilities between Pakistan and India, which was signed on December 31, 1988.

The two countries have regularly exchanged lists with each other under this agreement since 1992 even when there were tensions between them.

The agreement requires the two sides to annually exchange the lists of their nuclear facilities.

“The list of nuclear installations and facilities in Pakistan was officially handed over to a representative of the Indian High Commission at the Ministry of Foreign Affairs today, at 1100 hrs (PST),” the Foreign Office said.

“The Indian Ministry of External Affairs in New Delhi handed over the list of Indian nuclear installations and facilities to a representative of the Pakistan High Commission at 1130 hrs (IST),” it added.

The FO said the Indian High Commission in Islamabad was separately provided a list of 319 Indian prisoners in Pakistan, including 270 fishermen and 49 other civilians.

“This step is consistent with the provisions of the Consular Access Agreement between Pakistan and India, signed on 21 May, 2008 under which both countries are required to exchange lists of prisoners in each other’s custody twice a year, on 1st January and 1st July, respectively,” it added.

New Delhi, meanwhile, shared a list of 340 Pakistani prisoners in India, including 77 fishermen and 263 other civilians, with the High Commission for Pakistan in New Delhi.

FATF should take action against India for money laundering, threatening...