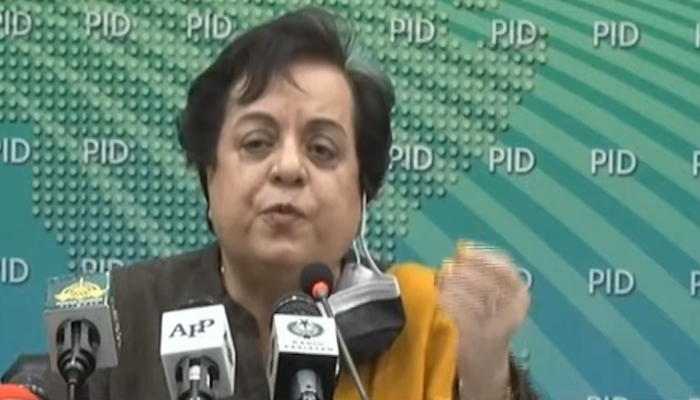 Islamabad: Federal Minister of Human Rights, Dr Shireen Mazari has called out the Indian government for committing war crimes by moving prisoners from Indian illegally occupied Jammu and Kashmir to India and violating the Geneva Convention through ill-treatment of women prisoners.

Addressing a press conference alongside Aasiya Andrabi’s son, Shireen Mazari said, the Narendra Modi government has violated Article 76 and 83 of the Geneva Convention by moving the Kashmiri Hurriyat activist to Tihar jail in New Delhi.

Dr Shireen Mazari said, “Andrabi and two other women with her are unwell but the Indian government is denying her medical assistance.”

“Article 76 says that women shall be confined in separate quarters and shall be under the direct supervision of women… and the detainees have the right to be visited by the Red Cross but Indian authorities don’t even provide doctors.”

The minister asserted that the Indian government was violating international laws and called upon the international community and local and international human rights organizations to condemn the actions.

The minister said Pakistan should demand an international tribunal to proceed against India regarding war crimes. “In 2005, all countries at the United Nations accepted the responsibility to protect in principle that every country has the responsibility to intervene. There are laws present. So the question is: why is the world silent? Is it our failure that we are unable to make a strong case or are countries avoiding taking on India due to economic interests?”

A 2021 manifesto for India’s Christian community