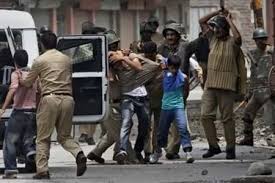 The troops and police arrested two youth during a cordon and search operation in Lelahaar area of Pulwama. One among these youth had sustained injury in the firing of the troops during the operation. He was shifted to hospital for treatment.