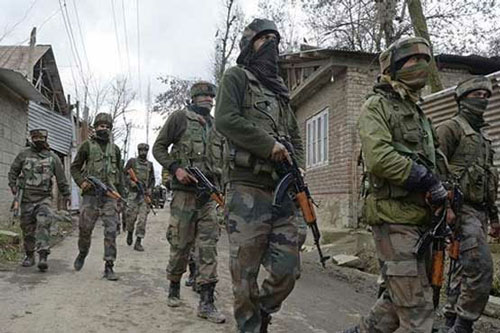 Srinagar: In Indian illegally occupied Jammu and Kashmir , the All Parties Hurriyat Conference and other Hurriyat leaders and organizations have said that Indian troops are engaged in the genocide of Kashmiris to suppress their struggle for securing freedom from India’s illegal occupation of their homeland.

The leaders and organizations paid glowing rich tributes to the three Kashmiri youth, who were martyred by Indian troops in Tral area of Pulwama district, yesterday.

The APHC spokesman in a statement issued in Srinagar said that the Kashmiri youth were rendering their lives for a great cause and their sacrifices would not be allowed go waste. He maintained that India’s intransigence on the Kashmir dispute had endangered the peace of the region and entire world.

Senior Hurriyat leader, Ghulam Muhammad Khan Sopori addressing a condolence meeting in Sopore said the Kashmiris will accomplish the mission of their martyrs at all costs. The spokesman of Jammu and Kashmir Democratic Freedom Party in his statement appealed to the international community to impress upon the fascist Indian government to stop bloodshed in IIOJK and give the Kashmiris’ their inalienable right to self-determination.

On the other hand, the Imam of Srinagar’s historic Jamia Masjid, Syed Ahmed Naqshbandi, reiterated the demand for the immediate release of the Chairman of Hurriyat forum, Mirwaiz Umar Farooq, from illegal and arbitrary detention. The demand was made on the occasion of release of the annual Calendar for Hijri 1442 and year 2021 at Jamia Masjid in Srinagar.

The Jammu and Kashmir Peoples League in a statement in Srinagar said that its leaders and activists held an anti-India demonstration in Srinagar. Addressing on the occasion, the party leader, Dr Sarfaraz Ahmad Khan, deplored that India was suppressing the Kashmiris’ just freedom struggle through killings, arrests, illegal detentions, harassment and other brutal tactics.

APHC leader and Chairman of Jammu and Kashmir Social Peace Forum, Advocate Devinder Singh Behl, addressing a religious program of Sikhs at Lam in Nowshera area of Jammu said that India repealed Articles 370 and 35A to strengthen its illegal hold on IIOJK, evict the Kashmiris from their homes and harm their identity.

Internet Suspended For 2 Days At Delhi’s Borders Amid Farmers’...