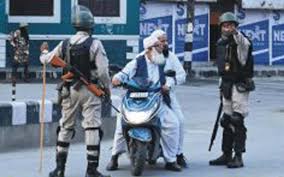 According to the details, the joint team of Indian Army, Central Reserve Police Force and Special Operation Group launched the operation in Wanigam Payeen area of the district. The operation was continuing till the last reports came in.

The residents of the area told media that they heard several gun shots fired by Indian troops.

Meanwhile, Indian troops during house raids arrested over a half dozen youth in Pulwama district.

A 24-year-old MCA student, Saqib Ashraf, has been missing since 20 December from Baramulla district. Saqib went missing when he was returning home from Kashmir University.