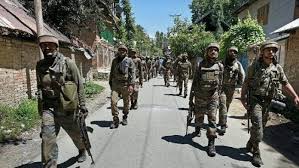 The troops launched door to door searches in Devar Lolab area of Kupwara district, subjecting the residents to huge inconvenience amid severe cold. The operation was going on when last reports came in.

The Indian troops also continued door to door searches in several areas of Shopian. The operation was launched on Thursday in a Mohalla in Shopian town which was extended to several other areas on Friday and still continue.

Guterres ‘shocked’ at massacre of civilians in eastern DR Congo