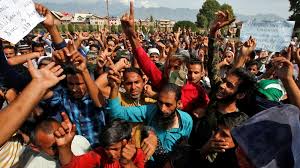 Islamabad: The Jammu and Kashmir Pir Panjal Freedom Movement (JKPPFM) has said that India is not even a democratic country.

The JKPPFM Vice Chairman, Qazi Imran said India is a terrorist country which is massacring the oppressed Kashmiris on a daily basis in Indian illegally occupied Jammu and Kashmir (IIOJK).

He deplored that the massacre of innocent Kashmiris by Indian troops in fake encounters was continuing and the bodies of the martyred youth were also not being handed over to the families for proper burial.

Qazi Imran also paid rich tributes to the Sopore martyrs of January 1993. He said that on January 6, 1993, Indian troops opened indiscriminate fire in the town martyring over 60 innocent Kashmiris and burning more than 350 buildings, including residential houses and shops.

He urged the United Nations to take notice of Indian state terrorism in IIOJK and play role in peaceful settlement of the lingering Kashmir dispute.