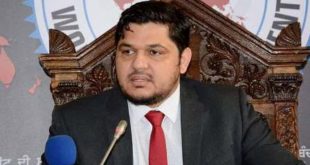 Islamabad: Raja Fahim Kayani President of Tehreek-e-Kashmir, UK has said that Kashmiris have made great sacrifices for their birthright to self-determination while India has failed to suppress their freedom sentiment despite all its tactics of oppression.

He expressed these views during a meeting with the leaders of the All Parties Hurriyat Conference Azad Jammu and Kashmir (APHC-AJK) chapter in Islamabad. The Chairman of Kashmir Forum, France, Chaudhry Naeem was also present on the occasion.

Raja Fahim Kayani said that Kashmiri people were currently the worst victims of Indian state terrorism. He said that greater unity was need of the hour, adding: “We should play our role to further strengthen the Hurriyat Conference.

He said that Tehreek-e-Kashmir, UK, was trying to expose illegal Indian activities and atrocities on innocent Kashmiris in occupied Jammu and Kashmir at every forum of the world. Headded that India should take steps to resolve the Kashmir dispute peacefully by acknowledging the ground realities.

The Hurriyat leaders on the occasion said that Kashmiris were making sacrifices for a great cause which would not be allowed to go waste and urged the international human rights organizations to take note of the growing Indian state terrorism in IIOJK. Condemning the continued illegal detention of Hurriyat leaders in the jails of India and the territory, they demanded their immediate release.

Participants of the meeting paid tributes to the three youths who were martyred by Indian troops in Srinagar, yesterday, and expressed solidarity with the bereaved families.