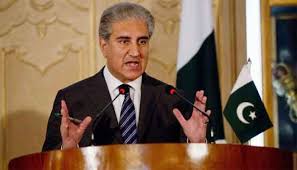 Multan: Foreign Minister Makhdoom Shah Mahmood Qureshi said the government has strong evidence that India is patronising terrorists and other banned organisations to create unrest in Pakistan, but it will not succeed in its nefarious designs.

While addressing a ceremony at the Union Council Multaniwala in his hometown, FM Qureshi said the neighbouring country is conspiring to destabilise us.

The foreign minister said India had earmarked billions of rupees to damage the China Pakistan Economic Corridor (CPEC) project. Similarly, the FM added that India was also sabotaging the peace process in Afghanistan.

“Disinfo Lab had exposed India’s conspiracies also. Due to inhuman measures by the Narendra Modi government, the voices are also being heard against the fascist regime from inside India.

Instead of addressing local issues, the Indian government was bent on hatching conspiracy against Pakistan. India’s nefarious designs could create law and order situation in the region and the consequence would be disastrous,” he said.

The FM said that Pakistan was taking practical as well as diplomatic steps to foil conspiracies of the enemy while the armed forces were successfully abolishing the menace of terrorism.

Similarly, the whole nation was standing behind the armed forces to protect the country’s sovereignty. He, however, urged upon the leadership of opposition parties to demonstrate responsibility and ignore personal agenda and forged unity against foreign aggression.

Next round of Afghan peace talks to take place in...