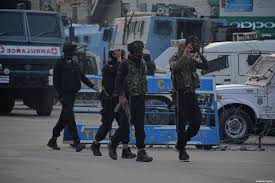 The Centre for Middle East and Africa (CMEA) in collaboration with Middle East Monitor organized a webinar entitled “Kashmir & Palestine: The destruction of Indigenous Cultural Heritage“.

Sardar Masood Khan highlighted several overlapping and differing aspects of the two struggles of Kashmir and Palestine in his keynote address. He expressed that the dilemma of the United Nations (UN) was that it always sheds a tear after the genocide had occurred. Speaking on the role and responsibility of the UN, he conveyed that the organisation has an obligation to honour the voices and rights of the people of Palestine and Kashmir in their struggle for the right of self-determination. He also enlisted the several stages of genocide as classification, symbolism, discrimination, dehumanisation, organisation to commit genocide, politicisation, persecution, final extermination and denial. Kashmir, he pointed out, was at the stage of persecution. He also stressed that while Palestine received widespread international support, Kashmir did not obtain the same level of attention.

In her introductory remarks, Director of CMEA Amina Khan outlined that there are several parallels between two of the most protracted and deadliest conflicts – Kashmir, where the people have been struggling for the right of self-determination in the face of Indian atrocities, and Palestine, where its people have been striving against brutal Israeli occupation. In Khan’s view, despite the adoption of the UN Declaration on the Rights of Indigenous Peoples, which acknowledges the rights to culture, diversity and self-determination, claims of cultural genocide are often derided, and their indicators dismissed as benign effects of modernity and indigenous cultural diffusion. Both India and Israel use diversion tactics in order to shift the focus away from their actions. Israel camouflages its brutal occupation by blaming suicide bombings by Palestinians and the disunity between Hamas and Fatah. Similarly, in order to deflect attention from the human rights violations in Indian-occupied Kashmir (IOK), Prime Minister Modi uses terrorism and Islamophobia to vindicate his government’s actions against the innocent civilians of Kashmir.

Dr Daud Abdullah, Director of Middle East Monitor, elaborated in his introductory remarks that the looting of cultural property and destruction is a main feature of armed conflict from time immemorial. Victors of occupation have regarded it as their right to rob the defeated populations of their distinct cultural heritage. He noted that in the cases of both Palestine and Kashmir, as a result of armed conflict, we have witnessed a huge loss of cultural property and heritage. Buildings, museums and archives were looted while rituals, festivals, languages and cultural practices, which were generational in nature, were either destroyed or inhibited. Dr Abdullah also referred to the Genocide Convention of 1948 and the Geneva Conventions that emerged from the situations during both world wars. He emphasised that to keep this discussion alive and bring it under the broader definition of genocide, both MEMO and CMEA have come together to organise this webinar.

Director General of the Institute of Strategic Studies in Islamabad Ambassador Aizaz Ahmed Chaudhry communicated in his remarks that the US deal of the century has emboldened the Israeli leadership and prevented the resolution of the Palestinian conflict, while in Kashmir after the revocation of Articles 370 and 35A, all hell broke loose and the Genocide Watch has also issued an alert in this regard. He further stated that the US tilt towards India has encouraged Modi’s government to continue its atrocities against the people of Kashmir, instead of honouring the UN resolutions on Kashmir.

Mushaal Hussein Mullick spoke about the plight of the Kashmiris and Palestinians and gave her own account of the struggles that her husband has been facing due to Indian atrocities. She also addressed the parallels that exist between the Israelis and Palestinians, and that concerted efforts are required on the parts of the Palestinians and Kashmiris to create greater solidarity and engage with the international community to further these causes.

Kevin Chamberlain explained that while focus is laid on the hardships suffered by the Palestinian people as a result of the Israeli occupation of Gaza and the West Bank, considerably less publicity has been given to the systematic destruction of Palestine’s rich cultural heritage resulting from the occupation. Following the 1967 conflict when Israel occupied the West Bank and Gaza, there was intense archaeological activity. Objects were removed in two ways – officially by the Israeli occupation authorities, or clandestinely by individual Israeli soldiers, civilians and, unfortunately in some cases, even by Palestinians driven by financial woes.

Dr Salma Malik discussed women as targets of genocidal campaigns, the trauma women endure in conflicts such as in Kashmir and Palestine and how systematic erasure of the cultures of indigenous people is carried out by occupying forces.

Dr Mahmoud Hawari detailed how the Palestinian people have a vibrant culture and heritage represented in all aspects, through music, theatre, film and literature, which has been proven through extensive archaeological expeditions.

He also talked about the destruction of indigenous cultural heritage and the use and misuse of archaeology. He voiced his solidarity with the people of Kashmir and Palestine against the brutalities that have been waged by their occupiers. He addressed the sites that are of religious significance to the three religions – Judaism, Christianity and Islam – yet Christians and Muslims are not allowed to visit.

Dr Khuram Iqbal considered the global reactions to the ongoing genocide in Kashmir and Palestine, evolving convergences between Zionism and Hindutva and how it could lead to extinction and the possible ways forward in countering this.

Ambassador Khalid Mahmood concluded by stating that while the origin of these two disputes – Palestine and Kashmir – are different, several components like the right to self-determination, violation of sanctity of UN resolutions and of international humanitarian laws are common factors. www.middleeastmonitor.com

OIC resolution on Kashmir: Did Pakistan secure a diplomatic victory?...