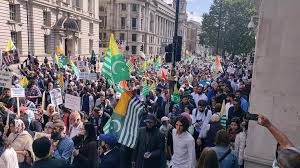 Islamabad: The people of Jammu and Kashmir want peaceful settlement of the Kashmir dispute by exercising their right to self-determination through a free and impartial plebiscite held under the supervision of the UN.

According to a report, the UN had acknowledged the Kashmiris’ right to self-determination in its more than a dozen resolutions, particularly the one passed on January 05, 1949. It maintained that despite suffering 73 years of brutal Indian occupation, the Kashmiris remain steadfast in their demand for holding of the UN-supervised plebiscite. It added that the Kashmiris’ right to plebiscite was even accepted by Indian leaders including first Prime Minister, Jawaharlal Nehru.

The report emphasized that the UN resolutions passed on Kashmir were binding for Pakistan and India. They have an international obligation to implement these resolutions and give the Kashmiris the right to decide their destiny themselves, it said.

The report said, despite the fact that Pakistan and India have signed mutual agreements like Simla Pact, the UN resolutions on Kashmir have an overriding effect and can’t be rendered invalidated by accords between the two countries.

It pointed out that India’s action of 5th August 2019 regarding Jammu and Kashmir was also intended to make the UN resolutions on Kashmir obsolete. The demographic changes in the occupied territory were designed to affect the results of the plebiscite whenever held in the future.

Hurriyat organizations including Jammu and Kashmir People’s Freedom League, Jammu and Kashmir National Front, Jammu and Kashmir Freedom Front, Tehreek-e-Wahdat-e-Islami and Islamic Political Party in their statements maintained that Indian brutalities in IIOJK continued to pose a challenge to global community. They lamented that the world community has miserably failed to implement the UN resolutions on Kashmir. “India’s stubbornness is the main stumbling block in peaceful resolution of the Kashmir dispute. India must be pressurized to fulfill its pledges made before UN to resolve the Kashmir dispute,” they added.

League of the Nations Covenant and the United Nations Charter