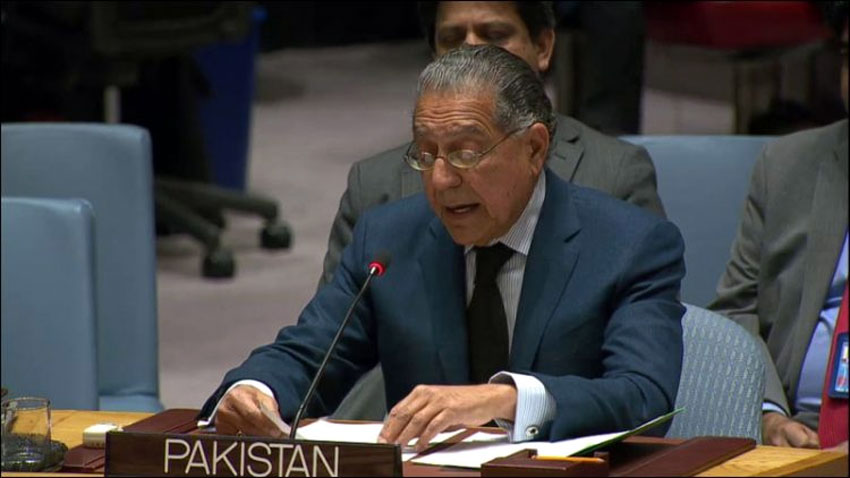 United Nations: Calling India’s illegal military occupation of Jammu and Kashmir among the UN Charter’s worst violations, Pakistan told the United Nations Security Council “Arria Formula” meeting that the struggle of people for their recognised right to self-determination cannot be equated with terrorism.

Mexico, a non-permanent member of the Security Council, convened the meeting on “Upholding the collective security system of the UN Charter: the use of force in international law, non-state actors and legitimate self-defence”.

The meeting was held under the format of Arria formula, which is named after a former Venezuelan UN ambassador, Diego Arriva.

It is a very informal consultation process that affords the 15-member Council, the opportunity to hear persons in a confidential, informal setting.

Islamabad’s permanent ambassador to the UN Munir Akram, while speaking in the debate, regretted that after the September 11, 2001, terrorist attacks, the fight against international terrorism has been utilised to justify the unilateral use of force and foreign intervention.

He emphasised that the purpose of the UN Charter was to outlaw the resort to war.

“Unfortunately, today the resort to unauthorised and unilateral use of force is most visible in several situations — in foreign occupation and intervention; in denial of the right of self-determination; in the coercion of smaller and weaker States,” he added.

“Pakistan faces cross-border attacks by terrorist groups from the territory of the neighbouring state supported by a third state,” the Pakistani official highlighted.

On its part, Ambassador Akram said Pakistan has respected the territorial sovereignty of its neighbouring states while maintaining its right to self-defence against the state sponsoring those terrorist attacks. APP