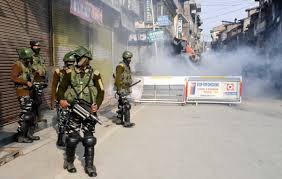 Srinagar: Indian troops have committed scores of brutal carnages, most of them in the month of January in Indian Illegal Occupied Jammu and Kashmir (IIOJK).

According to a report, in eight years starting 1990, as many as five major massacres left hundreds of persons dead and property worth crores in ruins.

On January 21, 1990, occupational troops slaughtered over 50 civilians in Gaw Kadal area of Srinagar, 25 on January 25, 1990 at Handwara, 60 on January 06, 1993 in Sopore town and 27 on January 27, 1994 in Kupwara. Besides, tens of thousands of Muslims were massacred in Jammu by Indian Army and Hindu fanatics in November 1947. Memories of these bloodbaths are still fresh in Kashmiris’ minds as they are reminder of the criminal face of Hindutva forces.

The report further said that the aim of committing massacres is to instill fear among the Kashmiris. Citing statements of BJP leaders and ministers of Modi-led fascist Indian government and warnings by international human rights organizations and groups particularly the Genocide Watch, the report feared that BJP-RSS nexus was planning to carry more Jammu, Gaw Kadal and Sopore like massacres in occupied Kashmir.

It is worth mentioning here that in the second half of August 2019, Genocide Watch, a global organisation dedicated to the prevention of genocide, issued two warning alerts for India — one for the occupied territory of Kashmir and the other for Assam state. The genocide alert regarding occupied Kashmir identified the genocidal process, based on Dr Stanton’s 10 Stages of Genocide, which include Classification, Symbolisation, Discrimination, Dehumanisation, Organisation, Polarisation, Preparation, Extermination and Denial. While elaborating the phase Extermination, the Genocide Watch reported that since 1990, there have been at least 25 massacres by Indian troops.

Despite the fact that the BJP-led Indian regime has crossed all records of atrocities to change Muslim majority Jammu and Kashmir into a minority area, India has failed to kill the freedom sentiment of Kashmiris, the report noted. It urged the international community to come forward to stop genocide of Kashmiri people at the hands of brutal Indian forces.

Bangladesh demands justice over killing of innocent citizens on Indian...