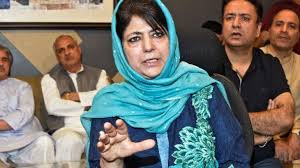 Srinagar: President of Peoples Democratic Party (PDP), Mehbooba Mufti has said that the Modi government is deliberately endangering the lives of political opponents in the territory.

A day after PDP leader, Nayeem Akhtar was shifted to hospital after being found unconscious in a makeshift jail, Mehbooba Mufti tweeted, “Nayeem Sahab’s illegal detention in a government building ill equipped for Kashmir’s biting cold finally took a toll on his health. Going by GOIs (government of India) callous and spiteful attitude it seems like they deliberately want to endanger political opponents.”

Nayeem Akhtar was arrested from his home on December 21, 2020. The family had said that police directed him to come along with them without showing any formal order with regard to arrest.

The 68-year-old PDP leader was found unconscious in a sub-jail room in Srinagar and was shifted to a hospital on Thursday.

A family member of Nayeem Akhtar told media that there was no doctor available to attend him in the sub-jail.