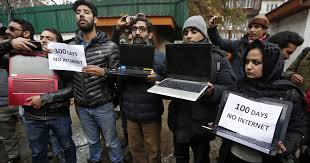 Jammu: In Indian illegally occupied Jammu and Kashmir, the authorities have once again extended the ban on high speed internet service till January 08, 2021.

An order issued by Principal Secretary Home Department of IIOJK, Shaleen Kabra, said that the high speed internet would remain suspended in the entire territory barring two districts of Ganderbal and Udhampur.

The 4G internet service remains suspended in IIOJK since 5th August, 2019 when Narendra Modi-led fascist Indian government repealed the special status of the territory and placed it under strict military siege.

The residents of the occupied territory continue to suffer immensely in the times of coronavirus pandemic due to continued blockade of high speed internet service. When the entire world is relying on the latest means of communications particularly internet to remain aware of the situation caused by the COVID-19, the people of IIOJK have been kept deprived of this basic facility for the past over 16 months.