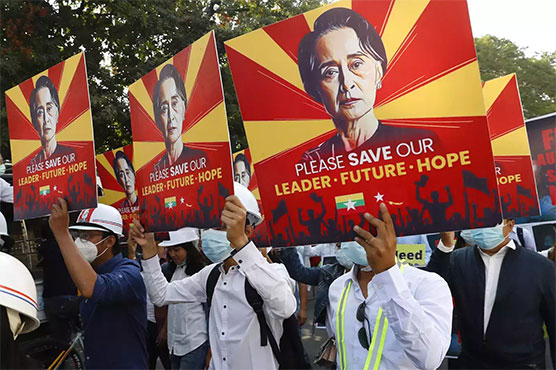 Yangon: Myanmar s junta deployed extra troops around the country and choked the internet for the second night in a row as it intensified a crackdown on anti-coup protests, but defiant demonstrators again took to the streets.

The military has steadily escalated efforts to quell an uprising against their seizure of power two weeks ago, which saw civilian leader Aung San Suu Kyi detained along with hundreds of others, including members of her democratically elected government.

Suu Kyi and President Win Myint are expected to be questioned by a court “via video conferencing” in the country s capital of Naypyidaw this week, said lawyer Khin Maung Zaw, adding that he had not been able to make contact with either client.

Neither has been seen in public since they were detained in dawn raids on February 1, the day of the coup.

The generals imposed an hours-long internet shutdown Monday morning and ratcheted up the military s presence across the country overnight, including armoured vehicles in Yangon, the nation s commercial hub and biggest city.

On Tuesday, another internet blackout blanketed Myanmar, dropping connectivity to 15 percent of ordinary levels, according to UK-based monitoring group NetBlocks.

“#Myanmar is in the midst of a near-total internet shutdown for a second consecutive night” as of 1 am local time (1830 GMT), NetBlocks tweeted early Tuesday morning.

The shutdown comes after a day of protesters taking to the streets in defiance of heavy troop presence around Yangon — although turnout was smaller than in recent days.

The United Nations denounced the choking of the internet.

The envoy noted that such shutdowns “hurt key sectors, including banking, and heighten domestic tensions. And, so, we ve made our concerns about this very clear,” said Haq.

“Patrolling with armoured vehicles means they are threatening people,” said 46-year-old Nyein Moe, among the more than 1,000 gathered Monday in front of the Central Bank, staring down armoured vehicles parked there.

By afternoon, news of a strong police presence at the city s headquarters of Suu Kyi s National League for Democracy (NLD) party drew thousands to the scene.

They chanted “End military dictatorship” as the officers stood guard.

“About seven police officers searched for about 30 minutes (for two MPs),” NLD member Soe Win told AFP after the security forces left without finding them. “Now everything is settled.”

Across the country, people continued to take to the streets Monday to call for the release of Suu Kyi — with some incidents of violence.

A demonstration led by student groups in Naypyidaw was met with force after the gathering had retreated. Police also arrested dozens of the young protesters, though some were later released.

Mandalay, the country s second largest city, saw a clash which left at least six injured after police used slingshots against protesters and fired rubber bullets into the crowd. AFP

Amid BJP’s plans to extend footprint in South Asia, Sri...

Only 4 sedition cases saw conviction in 4 years in...