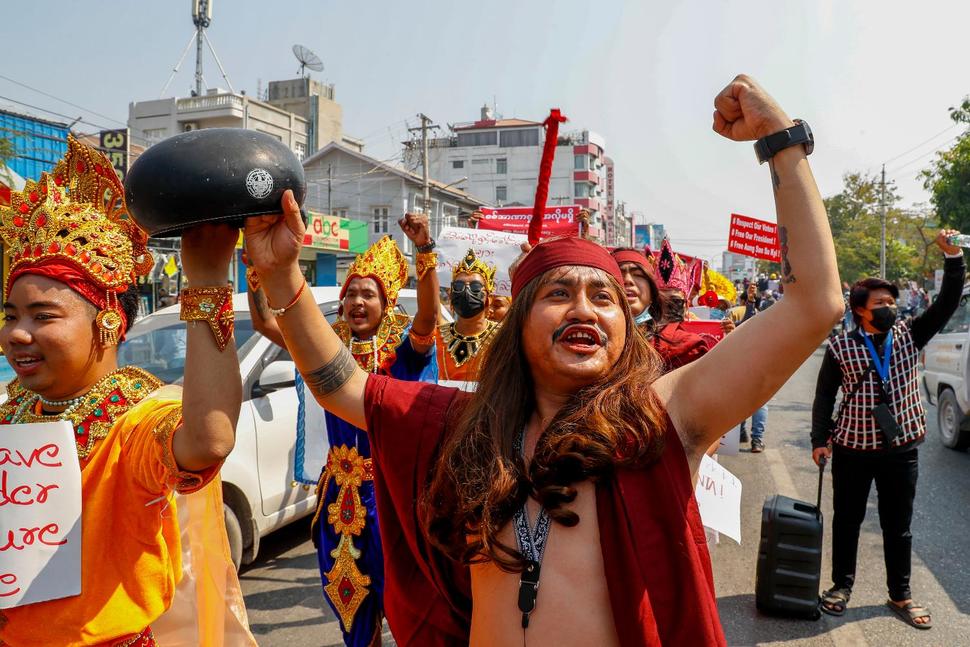 Yangon:  Myanmar’s coup leader used the country’s Union Day holiday on Friday to call on people to work with the military if they want democracy, a request likely to be met with derision by protesters who are pushing for the release from detention of their country’s elected leaders.

“I would seriously urge the entire nation to join hands with the Tatmadaw for the successful realization of democracy,” Senior General Min Aung Hlaing said using the local term for the military. “Historical lessons have taught us that only national unity can ensure the non-disintegration of the Union and the perpetuation of sovereignty,” he added.

In addition to the military commander’s message published Friday in the Global New Light of Myanmar newspaper, the new junta also announced it would mark Union Day by releasing thousands of prisoners and reducing other inmates’ sentences.

Min Aung Hlaing’s Feb. 1 coup ousted the civilian government of Nobel laureate Aung San Suu Kyi and prevented recently elected lawmakers from opening a new session of Parliament. It reversed nearly a decade of progress toward democracy following 50 years of military rule and has led to widespread protests in cities around the country.

The military has said it was forced to step in because Suu Kyi’s government failed to properly investigate allegations of fraud in November elections, though the election commission has said there is no evidence to support those claims.

Recent rallies against the coup — now daily occurrences in Myanmar’s two largest cities, Yangon and Mandalay — have drawn people from all walks of life, despite an official ban on gatherings of more than five people. Factory workers and civil servants, students and teachers, medical personnel and people from LGBTQ communities, Buddhist monks and Catholic clergy have all come out in force.

Thousands of protesters, including Myanmar celebrities, demonstrated outside the Chinese Embassy in Yangon on Friday to criticize what they said was Beijing’s failure to condemn the coup.

Many of the protesters were students from local international schools and universities, and they held signs that read “We don’t want dictatorship,” “Stop helping the military coup” and “Free our leader.”

“The students and the people are about to face bloodshed,” protester Phyo Yadana Aung said. She accused state-run media of spreading “misinformation” about the protests. “We cannot let this happen.”

On Thursday, people from Myanmar’s ethnic minority groups, who are concentrated in far-flung, border states, joined in — a striking show of unity in a country where some groups have resented the Burman majority’s control and have also had their differences with Suu Kyi. But their deep mistrust of the military, which has brutally repressed their armed struggles for more autonomy, has made them uneasy allies with her party.

The protesters are unlikely to be swayed by Min Aung Hlaing’s call for unity, which come on Union Day, a national holiday celebrating the date in 1947 that Myanmar, then known as Burma, when many of the country’s ethnic groups agreed to unify following decades of British colonial rule.

The junta’s pardon orders published Friday in government-run media said that 23,314 prisoners would be freed, along with 55 foreign inmates. The orders also commuted some death-penalty sentences to life imprisonment and reduced the terms of other prison sentences.usnews.com

Modi has ‘given’ Indian territory to China: Rahul Gandhi